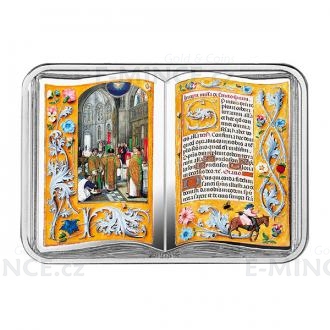 A 16th-century book of hours owned by the Rothschild family is one of the finest illuminated manuscripts and one of the most expensive devotional books ever auctioned. This outstanding masterpiece of Flemish Renaissance art contains illustrations of the most acclaimed and distinguished illuminators of the 15th and 16th centuries, including Gerard Horenbout, Gerard David, Simon Bening and his father Alexander. The prayerbook contains 252 folios, 67 of which are full-size miniatures. The borders of the vellum pages are richly decorated with floral motifs and illusionistically painted ornaments, i.e. peacock feathers, jewels, insects and objects of architecture.

Originally made c. 1505-1510 for a member of the imperial court in the Netherlands, it was added to the Rothschild family collection in the 19th century. Confiscated by the Nazis during World War II, the manuscript was returned to the family in 1999. Put up for an auction in 2014, it fetched the price of 13,605,000 dollars, setting a world record for an illuminated manuscript. Today, the masterpiece remains in private hands; it is displayed for the public in the National Library in Canberra, Australia.