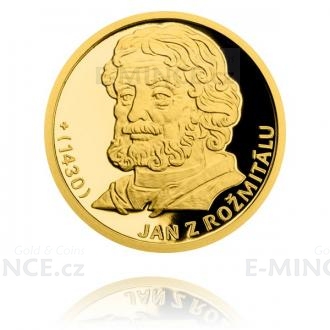 The time when the Czech Mint remembers one of the most important aristocratic families in our history comes to an end. In 2017, the last four gold coins represent The Lords of Rosental.

The academic sculptor Michal Vitanovsky traditionally chose and transformed the four noble aristocrats into relief. In accordance with his conviction, he united the powerful men - John, Lev and Zdeněk Lev together with a powerful woman - Johanka.

JOHN FROM ROSENTAL (died in 1430) was known primarily as the builder and founder of the Blatná family seat, which was further improved by his followers. The dominant feature of the area was the gothic castle with a prismatic tower, palace and chapel protected by a moat. John also set up the first local school at the local church.

LEV FROM ROSENTAL (1425-1482) had considerable property and a nice demeanour. However, only his sister Johanka, the wife of George of Poděbrady, was able to enforce his power. Lev became the leader of a legendary diplomatic expedition in the courts of Western Europe, where he enchanted with his demeanour and knightly skills. Hence he is represented on the reverse side of this coin in full armor with raised eyes.

JOHANKA FROM ROSENTAL (died in 1475) became the second wife of King George of Poděbrady – while the reverse side of the coin shows her with a royal crown on her head. She was not only a representative and educated beauty but, above all, a strong and reliable ruler who kept the country safe even after the death of her husband - she fought on the political field as well as on the battlefield.

ZDENEK LEV FROM ROSENTAL (died in 1535) was an ambitious and dreaded lord living in the Renaissance times. On the reverse side of the coin he is pictured in a typical period hat. Unlike the weak kings of the Jagellon family, he possessed real authority and power. Although he fell into disfavour and was deprived of the highest office, his abilities soon enabled him to ascend to the top of society.

All four mintages have an identical obverse side. In addition to the decorative cut of the Gothic rosette, it presents the necessities of the island of Niue, which allows the Czech Mint to coin its own coins. It includes the name and profile of Queen Elizabeth II, the year of issue 2017 and the nominal value of 5 DOLLARS (NZD).

A set of gold coins is presented in a wooden etui. Compared to previous cycle issues, this release has been limited to only 100 pieces!