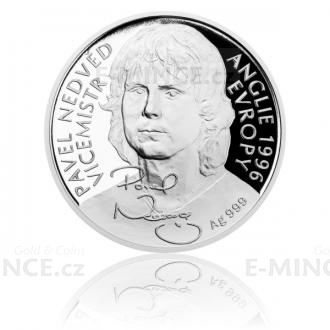 The third and final vice-champion of Europe in 1996, appearing on the silver coins from the Czech Mint of the collectibles series Czechoslovak Football Legends, becomes the phenomenal midfielder Pavel Nedvěd.

Pavel Nedvěd is almost unanimously seen as unrivaled icon of the modern Czech football. It was the silver medal from championship in England, that changed his life. It catapulted him among the world leaders and opened the gate to foreign involvement. Everyone wanted him into their ranks - Manchester United, Real Madrid, Arsenal, Barcelona, … During his professional career, however Nedvěd played in just three clubs. He pulled on the jersey of Sparta Prague, Lazio Roma and Juventus Torino and indelibly enrolled into their history. Although he ended his active player career, he settled in Juventus and became a respected functionary. "Now I recognize football from the other side" he concludes with a smile.

The artistic draft of the football coin has processed an experienced medalist MgA. Martin Dašek. On the reverse side he has placed a faithful portrait of Pavel Nedvěd with his distinctive hairstyle, and has complemented it with his signature and an inscription PAVEL NEDVĚD, ANGLIE 1996, VICEMISTR EVROPY /England 1996, European vice champion/. On the obverse side you will find the name and profile of Queen Elisabeth II., the year of issue 2017 and the nominal value of 2 DOLLARS (NZD) - these are the necessary attributes of the island of Niue, which provides a license for minting the commemorative coins for the Czech Mint. These are complemented by a soccer ball in the shape of heart, which is the logo of the Foundation of Football Internacionals. Without its support this series of football coins could not arise and part of the proceeds from the sale will be donated to help our retired players.

The entire football team can be stored into a stylish etui in the form of football field, which is offered in the Czech Mint menu.