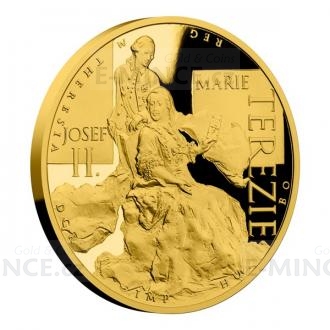 The gold coins weighing two troy ounces minted by the Czech Mint were traditionally devoted to historical pairs. In 2017 a great female ruler appears alongside her son Joseph II. on the occasion of the 300th anniversary of the birth of Maria Theresa.

Maria Theresa formed one of the greatest European monarchies in the spirit of Enlightenment absolutism for four decades. She was never afraid to push herself into areas dominated by men - she reformed education, state administration, justice, military, economical and financial politics, for which she earned the admiration of her subjects and rivals. In addition to renewed prosperity, she gave her country two more emblemless emperors. Notably her first-born son Josef II. whoenjoyed extraordinary esteem among the subjects. He was known as the folk emperor or peasant monarch. He set out in the world under the name Falkenstein, while he, incognito, recognized the country, its people, and its tribulations without embellishment. He followed his mother's progressive reforms and greatly improved the position of the common people. Among his greatest achievements was the abolition of serfdom and the issue of a tolerant patent allowing the practice of non-catholic confession.

Gifted medal maker BcA. Jakub Orava, DiS. became the artist of this coin. When creating the reverse side, he was inspired by the group portrait of the female ruler surrounded by her descendants. Maria Theresa dominates the picture while wearing the mourning dress that she wore after the death of her beloved husband. She holds the “bankozettel“, the breakthrough means of exchange introduced under her reign. Joseph II. stands behind her with a hand resting on the back of the chair. In addition to the names of both rulers, there is also a famous inscription "M THERESIA D G R IMP HU BO REG" from the Theresian coins, which can be translated as "Maria Theresa by the Grace of God Roman Empress, Hungarian and Czech Queen". The obverse side of the coin is then devoted to the necessary attributes of the issuer - the island of Niue, which provides the Czech Mint with a license to coin its own coins, i.e. the name and portrait of the Commonwealth Emperor Elizabeth II, the nominal value of 100 DOLLARS and the year of issue, 2017.