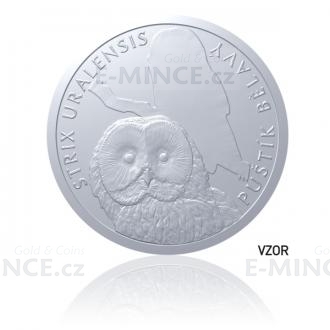 This 2017 collectible series of colored silver coins from the Czech Mint features representations of endangered species and continues with a representation from the bird kingdom - the Ural Owl.

The Ural Owl, despite his finely sounding name, is a large owl with a wingspan reaching even 120 cm. And that's not all - these hawks are excellent hunters and they fiercely defend their nests against any intruder, including humans. They fly at them violently and physically attack their intruder. This aggressive behavior has contributed to them becoming a critically endangered species in our territory, where they can only be found in the Beskidy Mountains, Šumava and the Bohemian Forest. Besides the fearlessness, the nighthawks also excel in their loyalty - they form monogamous pairs for life, while their life expectancy is around 25 years.

The artistic draft of the reverse side of the coin was created by an experienced medalist MgA. Martin Dašek. He has traditionally dedicated it to two differently processed views of the endangered animal. The first one is embossed and presents the detail of an owlish head, the other is colored and thanks to the tampon printing captures the owl in all its beauty and vivid colors, sitting on a branch. The composition is complemented with a Czech-Latin inscription PUŠTÍK BĚLAVÝ – STRIX URALENSIS. The obverse side comes from the atelier of an academic sculpturesess Majka Wichnerová - it carries a natural scenery of wild forest, which is completed with the year 2017, the nominal value 1 DOLLAR (NZD) and the portrait of Elizabeth II., thus the attributes of the island of Niue, which is the licensor for issuing the coins for the Czech Mint.

An integral part of the coin is the illustrated package in the form of a book with a cover describing the life of a Ural. You can save it in a collector's box, which is also offered in the Czech Mint menu.