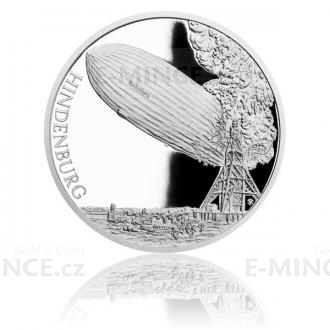 The second silver coin from the four-part miniset from the Czech Mint called Flying Century belongs to the tragic destruction of the Hindenburg airship. It took place 80 years ago and ended the celestial rule of this lighter than air means of transport.

The largest flying machine of all time (just a little smaller than the Titanic), a triumph of German engineering, was built by the famous company Zeppelin and named after the Reich president. While in the First World War, Zeppelin's aerostats were being destroyed, Hindenburg became a symbol of luxury and stylish travelling in 1936. It could fly at 135 km /h, carried 112 tons of useful weight and for the cost of one transatlantic ticket, you could buy a car at that time. Up to 72 passengers, were cared for by the safety and comfort of 61 crew members, and had private cabins, hot showers, hot meals, piano clubs, ... Even a smoking room, demonstrating the skills and self-confidence of German designers - the airship was filled with highly flammable hydrogen. Airship crashes were quite frequent at that time, but none of them involved the Zeppelins. Until the fatal 6th of May 1937 not a single passenger had been hurt. However, when landing in New York, the Hindenburg - probably due to the static electricity accumulation - exploded and 36 people died. The horrific performance was attended by a crowd of journalists whose suggestive reports scared the public. The majestic means of transport won a bad reputation due to following negative publicity, and aviation started to use machines that were heavier than air.

Asamat Baltaev, DiS. is the design author of this miniset. He came out of the legendary photo and dedicated the reverse side of the coin to the moment of the airship flare-up, seen by airport workers, reporters and cameramen from the roofs of their wagons near the anchor tower. The obverse side of the coin, which is common to the whole miniset, carries images of all four issues – airplanes of Charles Lindberg and Amelia Earhart, the Hindenburg airship and the Sputnik. Among them there are the attributes of the island of Niue, an issuer that allows the Czech Mint to coin its own coins: the profile and name of the monarch Elizabeth II., the year of the issue 2017 and the nominal value of 1 DOLLAR (NZD).

You can store the collections devoted to these milestones of the sky in a metal etui, which you can find on offer of the Czech Mint. It is decorated with a thematic illustration and accompanied by a photographic attachment.