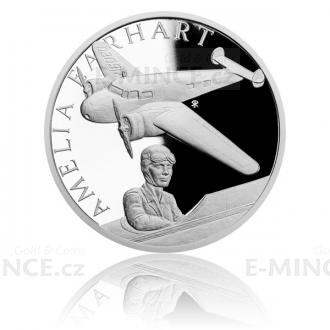 The Flying Century miniserie was launched by Charles Lindbergh - a legendary pilot loved by women around the world. One woman, however, decided to challenge him to do the same and much more, instead of mere admiration. Her name was Amelia Earhart, whois commemorated by the silver coin of the Czech Mint on the occasion of the 80th anniversary of her disappearance over the Pacific.

It was clear that Amelia would not be like the other girls - instead of dolls, she'd rather play with an air gun. During the First World War she was treating wounded soldiers, and when she was 24 she got her first plane. She really loved flying and set herself the highest standards. In 1928 when she was 30, she flew over Atlantic Ocean as the first female, two years later she beat the female speed record and at 35 she went solo over the Atlantic again. Moreover, at the age of 40 she began to plan a magnificent expedition around the world. Lockheed Model 10 Electra became the vehicle to achieve the dream, while Fred Noonan was her navigator. On June 1st 1937, they took off from Miami, but never reached their destination - they disappeared on July 2nd. President Roosevelt sent the US Navy, including an aircraft carrier, to search for the pilot, but it was unsuccessful. The fate of the expedition is a mystery - some theories say that the plane had broken down and the crew died in the fall, while conspiracy lovers claim the flight was on a spy mission and both pilot and navigator were executed by the Japanese. However, according to recent research, the brave pilot wrote the last chapter of her life story as a castaway on a desert island. Regardless, she became a national heroine and an inspiration for generations of women following in her steps.

The reverse side of the coin made by gifted medal maker Asam Baltaev, DiS., presents Amelia Earhart sitting in the cockpit of an airplane, wearing glasses on her head. In the background there is Electra, who carried the pilot at her last flight. The obverse side of the coin is common to the entire miniserie and is dedicated to the motifs of all four issues – the airplanes of Charles Lindberg and Amelie Earhart, the Hindenburg airship and the Sputnik. The obverse side also carries the essentials of the island of Niue, the issuer that provides the Czech Mint with license to mint its own coins: the profile and name of Queen Elizabeth II., the year of issue 2017 and the nominal value of 1 DOLLAR (NZD).

The silver coin is stored in a thematic collector's box which you can also find on offer at the Czech Mint.