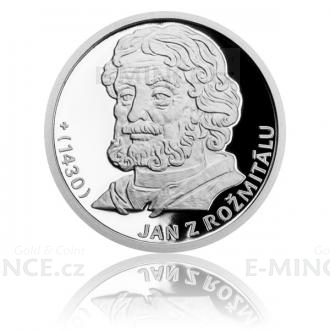 The free cycle of the Czech Mint, which represents the great aristocratic roots of our history, was closed in 2017. Finally, the representatives of Rosentall Lords appear on the four silver coins.

Apart from the three prominent men - Jan, Lev and Zdeněk Lev - the set commemorates an aristocratic woman - Johanka. The academic sculptor Michal Vitanovsky, a lover of history and heraldry, is the author of the mintage.

JAN FROM ROSENTAL (died 1430), went down in history as the founder of Blatna, the most important seat of the family, right after Rozmital. He cultivated the local swamps and developed generous building activity, when not only the Gothic castle but also the first local school was built.

LEV FROM ROSENTAL (1425-1482) was a characteristic late medieval knight - the reverse side of the coin features him wearing a helmet with a raised visor. He actively participated in tournaments, when he sometimes fought without armor. Moreover, he was wealthy and socially and diplomatically skilled. Therefore he became the leader of the expedition of King George of Poděbrady - his sister's husband. In Western Europe he was awarded the Order of the Golden Fleece which adorns his neck on the coin.

JOHANKA FROM ROSENTAL (died 1475) became the second wife of King George of Poděbrady. She wears a royal crown on her head on the reverse side of the coin. She was not only beautiful and energetic – but also a reliable support to her husband and the whole kingdom in difficult times. She did not hesitate, for example, to personally summon money and crusade against the enemy threatening her country.

ZDENEK LEV FROM ROSENTAL (died 1535) was a noble and generous man on the one hand, on the other tricky and merciless. However, his character enabled him to ascend to the highest of society. During the reign of the weak Jagiellon kings he had real power over the country. The reverse side of the coin represents him in an elegant renaissance hat.

The obverse side is common to all four coins. It bears the portrait and the name of Queen Elizabeth II, the year of the issue 2017 and the nominal value of 1 DOLLAR (NZD), ie the attributes of the island Niue, which allows the Czech Mint to mint its own coins. These essential elements are complemented by adecorative rosette.

The set of coins is stored in a wooden etui whose cost has been reduced compared to the previous issues and is limited to only 150 pieces!