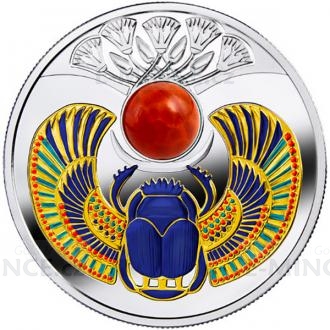 The “Agate Scarabaeus” constitutes a metaphorical representation of fire and the Sun. It is full of positive energy trapped in in agate millions of years ago. This souvenir, decorated with golden digital printing and a beautiful stone with a fiery shade, can be yours today! By buying this unique coin you will feel like the holder of a priceless treasure!

Agate, a beautiful mineral with iridescent colors and a complex structure, was used in jewelry making and applied arts of Ancient Egypt. Amulets, seals and statuettes of Egyptian gods were produced from it. This is why agate was believed to have inherent magical properties. The opalescent crimson color of the fire agate enhances courage and fortitude. This extremely rare variety of chalcedony will unlock your potential and rekindle your spiritual energy.

In Ancient Egypt, the scarab beetle was seen as the epitome of divinity. As a symbol of rebirth, it was believed to illustrate the Sun’s heavenly path across the sky and its daily self-renewal. Produced from precious metals and gemstones, these beautifully crafted sacred beetles were popular talismans, often used as currency. Today, the scarab-shaped amulets are excavated in the countries that once had close commercial relations with Ancient Egypt.