You are here:Home»World Coins»Tuvalu»2016 - Tuvalu Silver One-kilo Coin Franz Joseph I of Austria And Empress Elisabeth of Austria - BU 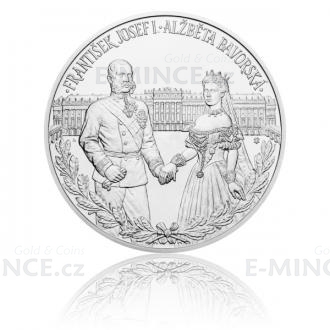 100 years ago, the Emperor Franz Joseph I. died at the Schönbrunn Palace. With the reign of the longest-reigning Hapsburg Emperor is associated quantity of the key events, that influenced the current form of European nations including the Czechs and Slovaks and thus  the Czech Mint pays him a special issue of coin minted from one kilogram of pure silver.

The Austrian monarch lived to a blessed age of 86 years of which 68 of them was spent at the head of the empire, for which he lived and breathed. "Wake me up at half past three, I did not manage to finish all the work," were the last words of the man who once described himself as civil servant. An extremely effective management of his vast empire took him most of the time, and in his life he had therefore little joy. One of them was the wedding with the Princess Elizabeth of Bavaria, which everyone called Sissi. Although they spontaneously fell in love, their relationship cooled over time. The culprit was the pressure of the imperial court. The young Empress, unlike her husband, barely tolerated the tragic fate of their children and their totally different natures. Although Sissi was unsupportive in the life of Francis Joseph, he never stopped loving her. Her death from the hands of the Italian anarchist hit him hard and he never fully recovered from it.

To the reverse side of the coin from the workshop of Asamat Baltaev, DiS., dominates the young imperial couple - Franz Joseph I with his majestic beard, in an uniform of Field Marshal festooned with a military orders and Elisabeth of Bavaria, in a fancy dress with a siding and her legendary hair ranging up to her knees. Although the couple are holding hands, there is a noticeable gap between them, into which is touted at imperial headquarters - the baroque Schönbrunn in Vienna.

The license for the issuance of this coin is provided by the island state of Tuvalu, and its obverse side therefore provides the necessary attributes of the issuer: name and portrait of Queen Elizabeth II., the nominal value of the coin 100 DOLLARS (TVD) and its year of release 2016.

The silver remembrance of great emperor comes in a run of only 100 pieces - each of them has a numbered certificate with illustrations and accompanying word of the author.