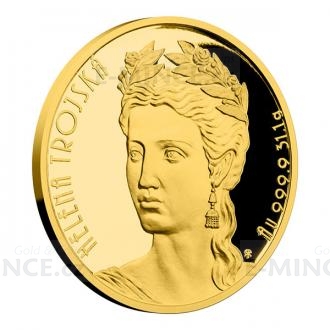 It is mostly male portraits that tend to dominate coins, so it is therefore time that women were given their own series And not just any ordinary women. The first issue of the series of one ounce gold Smart coins called Femme Fatale tells the story of a woman's face so beautiful, that a thousand ships sailed to the war because of her - the face of Helen of Troy.

When the Trojan prince Paris was deciding who is the most beautiful ancient goddesses, he had chosen Aphrodite. In return she promised him the most beautiful woman in the world as his wife. It was Helen, the daughter of Zeus, which, however, belonged to Menelaus - the King of Sparta.It is not certain that she was charmed by Paris, so she either escaped with him, or was dragged forcibly, but they did go together to Troy.In order to win Helen back, the lovelorn Menelaus asked his brother Agamemnon for help.

Together they gathered an unprecedented fleet of the Greek ships, on which sailed even the heroes such as the invincible Achilles and the wily Odysseus. Thus began one of the most famous military conflicts in the history and the war at the gates of Troy then lasted for nine long years. Helen was distressed that she caused such a bloodshed and her affection for Paride, who was not what he seemed to be at first glance, disappeared. When the prince had fallen and the town was conquered by a deceit, Menelaus lovingly took his wife back and she returned to Sparta at his side with relief.
Helen will forever remain a symbol of a beautiful but fickle woman, who is vaunted, but also damned.

The author of the coin is a talented medalist Asamat Baltaev, DiS. The reverse side is completely dedicated to the portrait of Helen of Troy. An outlined tunic, a wreath in wavy hair and complicated earrings only emphasize the beauty of the graceful face with typical Mediterranean features.

The obverse is dedicated to the attributes of the licensor for issuing the Smart coins, which is the Pacific island of Niue Island - nominal value X (NZD) the name and portrait of Queen Elisabeth II. and the year issue 2016.

The mythical ancient beauty will not be left alone on gold coins. In a series of the Femme Fatales will follow her for example the adored empress "Sissi" Elisabeth of Bavaria.