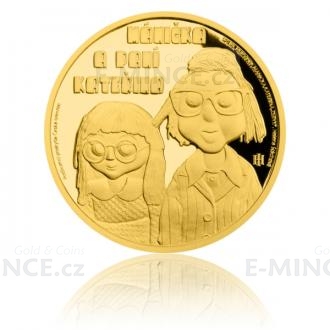 "Hurvínek, who celebrates his 90th birthday, and his puppet friends, are honoured to have their effigies minted in gold. The honoree likes the idea, that sometime in the 25th century, archaeologists will find an old gold coin and will long debate, who the president or king was that had ruled back then." says with a smile Helena Štáchová, who is the director of the Theater of Spejbl and Hurvínek and who also lends her unmistakable voice to both female members of the puppeteers ensemble. Without an exemplary Mánička and her granny Mrs. Kateřina the hilarious family would not be complete, therefore they are given the final issue from the miniseries of the gold Smart coins by the Czech Mint.

The Mánička puppet has undergone a number of changes since 1930, when it first appeared on the scene. Her hair, face, even her clothes have changed, but her large astonished eyes are common to all five forms. There were also changes in her personality and each of the three interpreters gave her something of themselves. Mánička had several foster parents. After her aunts Švitorková and Drbálková however, she permanently dwelled at the home of Mrs. Kateřina Hovorková, whom she lovingly called the granny. Her puppet was created in 1971 on a direct request of Helen Štáchová, who thus had the opportunity to portray two completely different character simultaneously.

The author of the form of the gold commemorative coin is for the third time the medaillist from Jablonec Irena Hradecká, DiS. The reverse side depicts the two puppets in their current form - dressed in an old fashioned clothes and with a large spectacles, symbolizing their love of reading and education.

The Smart coins are minted by the license of the issuer, which is the NIUE ISLAND, and therefore the obverse side belongs to its attributes: the name and portrait of Queen Elizabeth II., the nominal value 5 DOLLARS (NZD) and the year of issue 2016.

Do not forget, that a part of the Hurvínek’s coins is also a collectible album in the form of the theater scene and its place in it also have Mánička and Mrs. Kateřina.