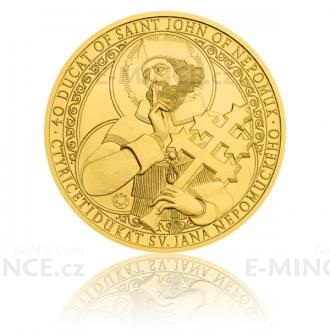 A Smart coin 250 NZD of pure gold weighing 40 ducats with the motif of the Czech provincial patron St. John of Nepomuk is a unique opportunity for all those who want to securely save their money, while looking for an interesting added value for their investments - this represents the extraordinary artistic compilation and the issue cost strictly limited to just 100 pieces!

St. John of Nepomuk (Ioannes Nepomucenus) was born around 1340 in the village of Pomuk near Pilsen. According to the legends he led a pious life and during the reign of King Wenceslas IV. he held the office of the General Vicar. His death was the result of the tension between the former archbishop and the king. Jan was subjected to the torture and legend says that, among other things, he did not even reveal the confessional secrets of Queen Sophia. His suffering ended with overthrowing his unconscious body from the Charles Bridge into the Vltava. He died on March 20, 1393 and as a martyr symbolizes the sacrifice for a loyalty and confidentiality. The midsummer legend about the life and an importance of John's death is closely intertwined with the history of our country, but his cult is famous in other countries with the Catholic religion as well.

The author of the Smart coin, dedicated to an important saint, is the academic painter Vladimir Pavlica. On the reverse he masterfully portrayed St. John of Nepomuk with a finger attached to his mouth, expressing his silence, and with a patriarchal cross in his left hand. It is this cross, that marks the spot where John's body was thrown from the Charles Bridge into the Vltava and is known by millions of people worldwide.

The rumor has it, that those who touche the cross with their hands and stamp with their feet the bronze dot in the pavement, their dreams will come true. The reverse side of the mintage is finished around the perimeter with a fancy ornament and bilingual text: 40 DUCAT OF SAINT JOHN OF NEPOMUK -  ČTYŘICETIDUKÁT SV. JANA NEPOMUCKÉHO.

The obverse carries the necessary attributes of the issuer, the nominal 250 DOLLARS and the information on weight and fineness of the coin, arranged into several circular patterns.

Entrust your financial reserves into the hands of the national patron, and add an exclusive gold jewel to your collection!