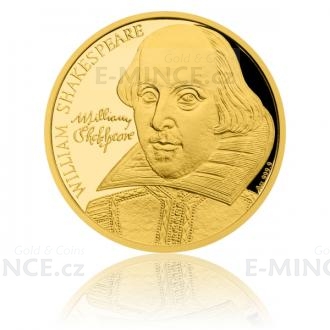 Every country has its own big anniversaries. But there are jubilees, which the whole world is celebrating together. We commemorate one of these this year,  April 23, 2016 - 400th anniversary of the death of William Shakespeare. The Czech Mint pay tribute to the world renowned playwrite, blessed with natural genius, a gift of words and a fine sense of humor, with the Smart coin 25 NZD of pure gold, weighing a half troy ounce, in a limited edition of 200 pieces.

Although William Shakespeare's life is shrouded in many mysteries, he is considered one of the greatest playwrights of all time. It is believed that he was born on April 23, 1564 in Stratford-upon-Avon and died on the same day in 1616. Shakespeare, also known as the "Bard", touched with his work the plainest poor people as well as the mighty kings. His theater plays include a comical topics, tragic ones, as well as historical ones and are still placed on the world's stages in a variety of preparations. Shakespeare's sonnets are then not only a masterfully poetic work, but also a treasury of wise thoughts. More than anyone else, had Shakespeare an impact on shaping the native language - more than 2000 words and phrases from his pen thus became a part of everyday English.

The proposal of the coin, issued in honor of William Shakespeare, undertook the academic sculptor Zbyněk Fojtů. The artist, who has made dozens of a successful realizations, has added another gem in his medalist’s portfolio. He has dedicated the reverse of the mintage to a precise portrait of the dramatist, his signature and name. The obverse is dominated by a relief rendition of the Globe Theatre, where Shakespeare presented his performances. The tableau is completed by the necessary attributes of the issuer, the nominal value of 25 DOLLARS and the year of the issue, 2016.

An artistic jewel in a strictly limited emission, with a high investment potential, should not miss your collections!