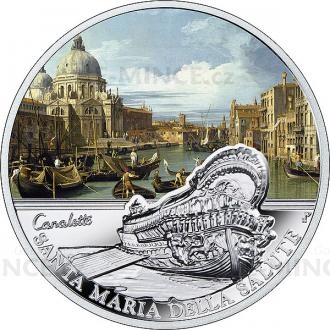 DISAPPEARING PEARL OF THE ADRIATIC COMMEMORATED IN PURE SILVER

Will Venice disappear without trace like Pompeii and legendary Atlantis? Will the tremendous forces of nature take over the impressive architecture of the city? There are numerous indications that Venice will soon disappear in the sea depths. The city is threatened not only by rising sea levels, but also by gradual landslides caused by the movement of tectonic plates. The Mint of Poland, concerned about the future of Venice and inspired by its fragile beauty, commemorated its distinctive landmarks in fine gold and silver.

The impressive architecture of the city has always been a source of inspiration for the great Italian painters. The fifth coin from the series “S.O.S. Venice – End or Beginning?” features the famous painting by Canaletto. One of his chefs-d’oeuvre depicts the Basilica di Santa Maria della Salute guarding the mouth of the Grand Canal. Picturesque 17th-century octagonal church was designed by Baldassare Longhena. Adorned with multiple sculptures, the Baroque basilica was built in honor of the Blessed Virgin Mary for her intercession and salvation of the city from the bubonic plague in 1630. The painting’s reproduction has been vividly reflected on the coin’s surface with the use of high-end digital printing. The bottom part of the reverse depicts the Bucentaur, the legendary state barge of the doges. It was used every year on the Ascension Day to celebrate the symbolic wedding of Venice with the Adriatic Sea. This elegant high-relief frame perfectly complements the work art by Canaletto.

The coin “Basilica di Santa Maria della Salute” is available in two versions. The first coin with face value of 2 New Zealand dollars was struck in fine silver with the use of high-relief minting technology, what additionally increased its artistic value. The second coin with nominal value of 50 New Zealand dollars was minted in 999.9 sterling gold. Very low mintage – only 40 pcs – confirms its uniqueness! If you want to add it to your collection, do not hesitate!