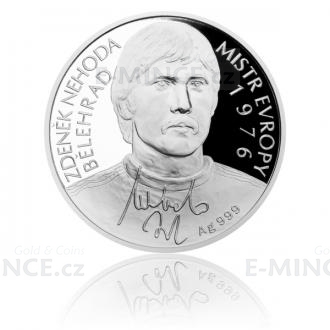 The spectacular Hall of Fame of Football legends is within your reach! The famous names of Czechoslovak football adorn this attractive silver Smart coin 2 NZD inasuperior quality mintage proof. The seventh issue of these small unique pieces of art belongs to one of the best inland players - Zdeněk Nehoda.

When in 1976 in Belgrade - Yugoslavia, our national team knocked out the Soviets in the quarterfinals, he participated in it. When we defeated the Dutch stars and the favored Germany in the semifinals, he was there. Zdeněk Nehoda. A club member of the Czechoslovak cannoneers, who launched his stellar career in a jersey of the former Gottwaldov, settled on Juliska stadium in 1971, where he played 12 extremely successful season. The last time he showed in the colors of Dukla, was the spring of 1982, however, after an injury he had to say goodbye to the love of his life. In 1983 he briefly appeared in a foreign clubs, such as the Bundesliga SV Darmstadt, the Belgian Standard Liege and the French Grenoble Foot 38. Is not without interest, that the exclusive shooter was not idle and graduated from the law school. To many football titles then he added one academic - JUDr. Today Zdeněk Nehoda belongs to the renowned football managers.

A tribute for Zdeněk Nehoda in the form of a silver mintage was prepared by MgA. Martin Dašek. The medalist renowned for his extraordinary sense of portraits, demonstrated his unique skills on the reverse of the Smart coin, where he portrayed the famous footballer, along with the inscriptions ZDENĚK NEHODA, BELGRADE and CHAMPION OF EUROPE 1976. The composition is completed with Nehoda’s signature. The obverse side also comes from Dašek’s  workshop and represents the necessary attributes of the issuer, the year of the issue 2016, the nominal value of 2 NZD and a soccer ball in the shape of heart - the logo of The Foundation of Football International, which will be supported with the proceeds from the sale of the coins. The issue is limited to 500 pieces - do not hesitate to complete your football collection!