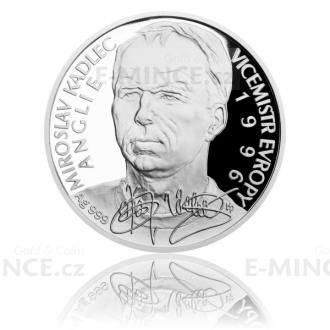 The decisive penalty by Miroslav Kadlec in the semifinals of the European Championship 1996 in England had sent the Czech team to the finals and enabled them to achieve the title of vice-champions. This is why the defender became part of the dream football assembly of the Czech Mint and has a Smart coin of pure silver dedicated in his honour.

"When we drew a core group with Germany, Italy and Russia, we thought we'd go straight home. Eventually we made it to the final at Wembley," recalls the footballer and when asked about a memorable penalty kick, he adds: "It was the longest journey I had ever gone - luckily I scored. The Czechs always knew how to kick a penalty, I just confirmed it." As the representative captain he also had the privileged to introduce the Czech players to the Queen of England, who gave them the silver medals.

But silver was not the only sporting success of Miroslav Kadlec - among others, he became a double champion of Germany and the winner of the German Cup. When he ended his football career, he did not leave football completely. He works as a football agent-manager, and is proud of his son Michal, who followed his footsteps - he also became a football representative and also went to the German Bundesliga.

The reverse of the eighth coin from the collectible series of the Czechoslovak Football Legends is a work of a leading medalist Mgr. Petr Horák. The characteristic portrait of the athlete is complemented by his signature, name and an inscription EUROPE CHAMPION 1996 ANGLIE (ENGLAND). The obverse of the whole cycle is then shared. It comes from the workshop of MgA. Martin Dašek and contains the attributes of the licensor for issuing the Smart coins, which is the NIUE ISLAND - the name and portrait of Queen Elisabeth II., the nominal value of the coins 2 DOLLARS (NZD) and the year of issue, 2016. A complementary motif on the obverse side is a soccer ball in shape of heart, which is the logo of the Foundation of Football Internacionals - without their support, this series could not arise and then use the proceeds from the sale of the coins, which will support their charitable activities.

Do not miss a collectible luxurious etui in the shape of a football field, that will crown your numismatic collection.