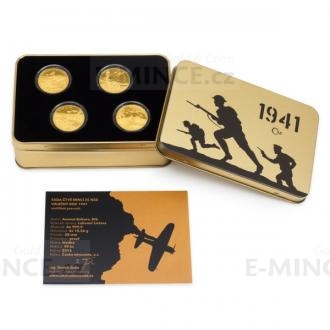 Throughout the year 2016 the Czech Mint issued a commemorative coins dedicated to the  75th anniversary of the key events of the war year 1941.

All four dynamic themes - the sinking of the Bismarck, the siege of Leningrad, the battle for Tobruk and the attack on Pearl Harbor - you can now enjoy in the full array of gold coins of greater weight and greater diameter.

The Sinking of the Bismarck - A destruction of the invincible German ship was not just for the British island kingdom a safety issue, but also a national pride and vengeance for the loss of their own flagship. The relentless firing and torpedo attacks became fatal for the Bismarck.

The siege of Leningrad - the Metropole named after the architect of the Russian Revolution was a thorn in the flesh for Adolf Hitler. It should have been destroyed and erased from history forever. It was a tight blockade, whose task was to break the city's inhabitants. They refused to surrender.

The Siege of Tobruk - an unstoppable African campaign of the Nazi troops cut off the Libyan port and imprisoned its defenders deep in the enemy territory. The men, among which have distinguished themselves also the Czechoslovaks, however, retained their firmness and eventually repelled the counterattacked of the Axis troops.

The attack on Pearl Harbor - a surprising Japanese attack on the US naval base in Hawaii caused heavy casualties. The shocked United States did not hesitate, they came against the Empire and finally became actively involved in the fighting of World War II. This aggression paradoxically led to the total victory of the Allies.

"I like to prepare the whole series at once. I immerse into it, "says Asamat Baltaev, DiS., the author of the epic form all four processed coins. The reverse sides bear the scenes of war, representing all nationalities fighters as well as their weapons and equipment - the British navy attacking the legendary battleship, the crew of the Leningrad antiaircraft battery shooting down an enemy bomber, the defenders reflecting the Tobruk Nazi tanks and the Japanese aircrafts sinking the US battleships moored in the harbor.

Each motif is complemented by the description in the form of the name of the coin, translated into the appropriate language - German, Russian, Arabic and English.

All four coins have a common obverse side - it is dedicated to the attributes of the island of Niue, which provides a license for the Czech Mint to issue the Smart coins, and bears the name and portrait of Queen Elizabeth II., the year of issue 2016 and the nominal value of 25 DOLLARS (NZD).

Daylight will see just 99 complete sets of coins. Each is complemented by a numbered certificate and above all, the thematic tin etui, which depicts the assault of Allied soldiers - an officer and his men from the "Desert Rats" - in the sands of north Africa.