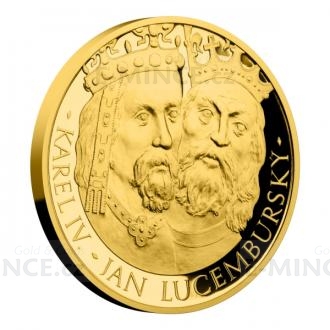 The celebration of the 700th anniversary of the birth of Charles IV. is not over yet! We are presenting to you an extraordinary issue of a gold coin weighing two troy ounces, which is dedicated to not only the greatest of the Czechs, but also to his father John of Luxembourg - 2016 will mark 720 years since his birth and 670 years since the demise of his knighthood.

The coin is a part of the series, which depicts a historical couples. So far, on the coins we have the reformers Jan Hus and John Wycliff and an acting duo Jiří Voskovec and Jan Werich. Now get their turn two medieval monarchs, who could not have been more different at first glance. While Charles IV. has earned the affectionate title Father of the Nation, John of Luxembourg is remembered as the unflattering Lord of Beauvoir. In fact, our history is rather wrong about John. He was known as John the Czech and for the legendary phrase which he uttered when he met his certain death at the Battle of Crecy, “You will never see the Czech king running away from a battle!”

The father of Father of the Nation didn't have it easy. He has become a ruler at only 14 years of age, he has inherited debts and rebellious country, and his wife was the very confident Elisabeth of Bohemia, who was trying to restore the government in the spirit of the Premysl dynasty. Charles IV., born as Václav, was their third child. Although the relationship between the noble father and son was not perfect, they never stood against each other with a sword in their hands. Quite the contrary. John worked hard for his son to gain influence, so he could be elected as the Holy Roman Emperor. Charles always stood by him faithfully - he was there when John became blind, and together with his father went into his last battle.

Both great men stand side by side on the reverse of the gold coin - the crowned busts are complemented by their names. "The historical themes are closest to me and I prefer to create portraits of the Czech rulers." says the author of the design of the coin Jan Lukáš, a leading Czech academic sculptor, who stood at the birth of Jablonec medal school. "I tried to make John of Luxemburg look like a rascal little more," he adds with a smile. The obverse of the coin is dedicated to a necessary attributes of the issuer, the nominal value of 100 DOLLARS, the year of issue 2016 and an unobtrusive Gothic ornament.