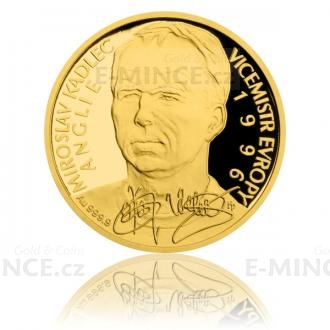 The series of champions has now expanded to include one more champion. It is no one smaller, than the representational captain Miroslav Kadlec.

"You would not believe, what goes through your head, on your way from mid-field. Most often, if you put it right, left, or middle, up, down, … Finally, you are there, somehow you kick it and you think  ‚hurray',“  the football defender recalls on his decisive penalty in the semi-finals with France, which ensured the Czech team the title of the Vice-Championship. The football stopper used to play on the now non-existent post of Libero. He excelled at balancing balls from the space between goalkeeper and the remaining defenders, supported the offensive with a precise passing and occasionally ran to backup outnumbered opponents, which he particularly enjoyed. „Basically, I did what I wanted to,“ laughs the football player, whose greatest advantage was his excellent right foot. It was exactly that leg that allowed him to precisely target the corners of the goal and score 42 goals in the top competitions. "I think this is a pretty decent statistic for the defender," proudly adds Miroslav Kadlec.

The dominant element of the reverse side of the gold coin from the workshop of Mgr. Petr Horák is a faithful portrait of the footballer, which is complemented by his signature, his name and the inscriptions Europe Champion 1996, ANGLIE (ENGLAND).

The Smart coins are issued under the license of the Pacific island NIUE ISLAND, and the obverse, whose author is MgA. Martin Dašek belongs to the necessary particulars of the issuer: the name and portrait of Queen Elizabeth II., nominal value of 10 DOLLARS (NZD) and the year of issue of the coin 2016. The icing on the cake is the soccer ball in the shape of a heart as a symbol of the Foundation of the Football Internationals. The Foundation sponsored a whole series of the coins and proceeds from their sale are devoted to charitable purposes.

You can save the coin, whose emission load amounts to just 200 pieces, to a luxurious etue stylized into a soccer field, which you can also find in the offer of the Czech Mint.