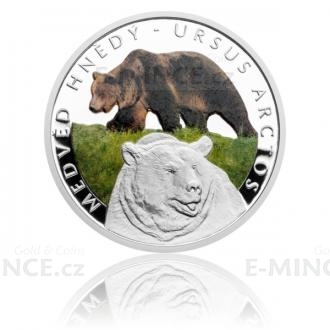 In the collectible series of the silver coins called the Threatened nature can be seen the plants and animals featured on the list of endangered species, which can be found in the Czech Republic or in the territory of the neighboring states. The Brown Bear, to which is dedicated the third issue of 2016, disappeared from our country centuries ago, but then began to come back from the Slovakian Carpathians.

Although the bear is Europe's largest predator reaching a weight of about 200 kg, the vast majority of its food consists of a plants. The Bear generally does not hunt meaty prey, but prefers carcasses, insects and, of course, honey. It is not strictly territorial and spends the winter in a sleep that lasts up to three months. Although bears are mainly vegetarians, notorious loners and winter sleepers, they evoke fear in people. But they  would hurt a human only in an exceptional cases, when the basic rules of the contact with these majestic animals are not respected. Because people are not as kind to the bears, the entire species are currently recorded as critically endangered.

The author of the form of the reverse side of the coin is an experienced medalist MgA. Martin Dašek. Traditionally it contains two different views on the animal - the closeup of the massive head is designed in a relief, the overall view of the beast while walking in grass is then processed in the form of an elegant coloring, that uses a pad printing technology.

The description indicates the name of the species in Czech and Latin: MEDVĚD HNĚDÝ – URSUS ARCTOS. The Smart coins from the Czech Mint are minted under the license from the Pacific Island of NIUE, and therefore the obverse side, besides the plastic depictions of a wild natural scenery, from the workshop of the academic sculpturesess Majka Wichnerové, also bears the attributes of the issuer: the name and portrait of Queen Elizabeth II., the nominal value of 1 DOLLAR (NZD) and the year of issue, 2016.

The coin is stored in a narrative package in the form of a illustrated book, which contains a text describing the life of the bear. In the menu of the Czech Mint website you will also find a collectible box, where you can store the issues of Threatened nature in a quadruples.