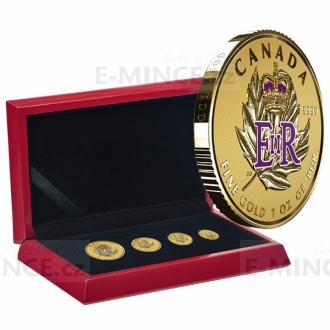 UNIQUE: Each one-ounce coin is individually edge-lettered with a serialized number! Order yours today!

During my lifetime, I have been a witness to this country for more than half its history since Confederation. I have watched with enormous admiration how Canada has grown and matured while remaining true to its history, its distinctive character and its values.
– Her Majesty Queen Elizabeth II, July 1, 2010.

For over six decades, Her Majesty Queen Elizabeth II has served as an enduring and beloved symbol of duty, service and continuity. The Crown of Canada, personified by Her Majesty The Queen, is central to our system of government and functions as the ultimate guardian of our democratic rights and freedoms that have evolved under constitutional monarchy flowing from Magna Carta in 1215. The Royal Canadian Mint proudly pays tribute to Her Majesty’s historic Canadian reign of service, dedication to and affection for this country and its citizens with a set of coins that brings together two symbols that are intrinsic to our national identity and pride.

Since ascending the throne in 1952, Her Majesty Queen Elizabeth II has not only witnessed but actively participated in decades of change and growth taking place in Canada, which has celebrated milestones ranging from the launch of our first satellite to the selection of a new national flag.

A gorgeous gift for a monarchist, who will cherish it forever! Order yours today!
Special features:

This magnificent set of gold coins pays tribute to Her Majesty Queen Elizabeth II, Queen of Canada, as the longest reigning Sovereign in modern Canadian history.
The Royal Canadian Mint’s world-renowned purity standard of 99.99% brings exclusivity and prestige to the set, which includes pure gold coins in one-ounce and fractional denominations.
EACH ONE-OUNCE COIN IS INDIVIDUALLY EDGE-LETTERED WITH A SERIALIZED NUMBER! Masterful engraving makes it possible for each one-ounce coin to be individually edge-lettered with a serialized number, ensuring each set is unique.
EACH OBVERSE FEATURES A DIFFERENT PROFILE PORTRAIT! To lend added historical context to this celebration of Her Majesty’s historic reign, each obverse features a different profile portrait.
The reverse features a beautifully engraved maple leaf carried by the autumn breeze, which has been polished to a fine reverse proof finish that allows each leaf to shine.
EACH REVERSE ALSO FEATURES THE ROYAL CYPHER EIIR.
PURPLE ENAMEL ON THE ONE-OUNCE COIN! The engraved Royal Cypher is further enhanced by the application of purple enamel on the one-ounce coin, which gives the lettering its regal colour.
Your coin set is GST/HST exempt.

All four coins feature a reverse design by Canadian artist Celia Godkin that showcases an engraved rendition of Canada’s beloved symbol, the maple leaf, as it is gently carried in the air by a soft autumn breeze. Underscoring Her Majesty Queen Elizabeth II’s role as Canada’s head of state, the Royal Cypher EIIR appears alongside the leaf and the word “CANADA”; the emblem is particularly resplendent on the 1 oz coin, where the addition of enamel adds a regal purple colour to the lettering and rendition of the St. Edward’s Crown. The obverse features the year “2016” along with the purity and each coin’s weight. In celebration of Her Majesty’s long and remarkable reign, different profile portraits are also featured on the obverse: the 1 oz. coin features a 1952 profile portrait of Her Majesty wearing the Imperial State Crown; the ¼ oz. coin features the effigy that first appeared on Canadian circulation coins in 1953, as designed by Mary Gillick; the 1/10 oz. coin features the 1965 effigy of Her Majesty by Arnold Machin; and the 1/20 oz. coin features the first effigy of Her Majesty to be designed by a Canadian, Dora de Pédery-Hunt. The coins are presented in a red lacquer case with a custom outer box showing an image of Her Majesty on her Coronation day, wearing the Imperial State Crown as shown on the 1 oz. coin.
Packaging: