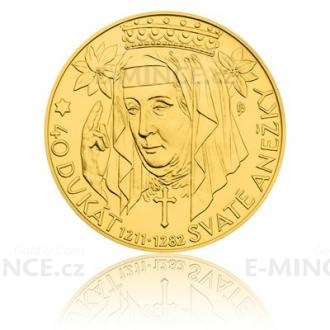 The name Agnes has Greek origin and means immaculate, clean. The most famous bearer of this name is undoubtedly St. Agnes of Bohemia, who fully deserves these pious characteristics. She was canonized, as a model of Christian faith and heroic charity, in the Saint Pete`s Basilica in Vatican, on 12 November 1989. Gold investment coin, dedicated to her admirers by the Czech Mint is another important tribute.

Czech Princess Agnes Přemyslid of Bohemia was born between the years 1205 and 1211 as a daughter of the King Ottokar I. of Bohemia and the Queen Constance of Hungary. When she was three years old, Agnes was placed to be educated by a community of Cistercian nuns in a monastery in Trzebnica and then in Doksany by Premonstratensian Canonesses and she reached a high quality education. Happiness of the child was replaced by long hours she spent in prayer.

She and her brother Wenceslaus I. founded a hospital in Prague's Old Town in 1232, and also a new military Order, dedicated primarily to nursing, known as the Knights of the Cross with the Red Star, which was recognized as the only Czech religious order by the Pope. Its monasteries gradually spread to many places of the country. In 1234, Agnes together with her brother founded a monastery for the Franciscan friars and the Poor Clare nuns on the northeastern edge of the former city, now known as "The Francis", where she became the first Abbess.

St. Agnes of Bohemia was a woman full of humility and love and she was helping the poor and the sick. Even during her lifetime she served as a model of virtue and piety. Legends about her mercifulness and charity did not lose their urgency even after more than 800 years, and are said down to the present day.

40-ducats Smart investment coin 250 NZD made of pure gold reminds us of her illustrious personality. Its author, Jaroslav Bejvl, presents a wonderful portrait of the blessing  Agnes of Bohemia with Czech crown and two lilies on the reverse side of the coin. The obverse side of the coin presents the issuer’s attributes, together with the building elements of St. Agnes of Bohemia Church and cross with star - symbols of the Knights of the Cross with the Red Star Order. This coin is linking an attractive investment opportunity with a real artwork, which will enrich your collection with immortal legacy of humility and faith.