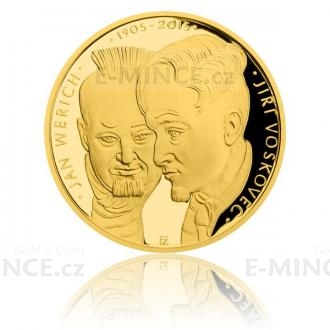 Two famous artists, two great creative personalities, two ounces of pure gold. All these aspects are masterfully represented in new two-ounce Smart gold coin 100 NZD, which the Czech Mint issued to commemorate the 110th anniversary of the birth of Jiří Voskovec and Jan Werich, in a limited edition of 200 pieces of extraordinary proof quality. The author of both sides of the coin is academic sculptor Zbyněk Fojtů, a skillful medallist, whose talent gave birth to another magnificent work of art, which bears, in addition to the original manufacturing of an interesting topic, also undeniable investment potential.

Jiří Voskovec (19th June, 1905, Sázava - 1st July 198, ,Pear Blossom) and Jan Werich (6th February, 1905, Prague - 31st October, 1980, Prague) created a duo in 1926, first as colleagues at the editorial offfice of the magazine called Přerod. Their collaboration inOsvobozené divadlo (Liberated Theatre), where they first appeared in 1927, led to the first authors' own game - Vest Pocket Revue. After its success, other great pieces were not long in coming. Until 1935 they worked under the auspices of the Liberated Theatre, after that, for two years, under the auspices of  Spoutané divadlo (Shackled Theater), in which they realized one of their most daring plays - Balada z hadrů. In 1937 they returned to the Liberated Theatre for one year, but it was soon closed and the three-Voskovec Werich-Ježek had to leave Czechoslovakia. During the Second World War they made their living as actors for the Czech community in the US and also preparing programs for anti-Nazi radio station Voice of America, which were transmitted in Europe. From the joint creation of Jiři Voskovec and Jan Werich many plays left a trace in the memory of viewers, such as Pěst na oko, Rub a líc, Těžká Barbora, Caesar, Osel a stín,  Golem, Kat a blázen or Svět za mřížemi. In addition to the plays thy also created films Pudr a benzín, Hej rup, Svět patří nám and Peníze nebo život.

The reverse side of the coin features Jan Werich and Jiří Voskovec as unmistakable clowns, together with the texts JAN WERICH, JIŘÍ VOSKOVEC, 1905-2015 on the perimeter.There are essential issuer´s attributes on the obverse side of  the coin -  portrait of the British ruler Elizabeth II, decoratively festooned with the letters V + W and inscriptions: ELIZABETH II, 100 DOLLARS, NIUE ISLAND N and 2015. Two-ounce coin 100 NZD Voskovec and Werich is an attractive and dignified way of  saving your financial reserves and a timeless reminder of the important eras of cultural history of the Czech nation. Enrich your collection with this wonderful addition!