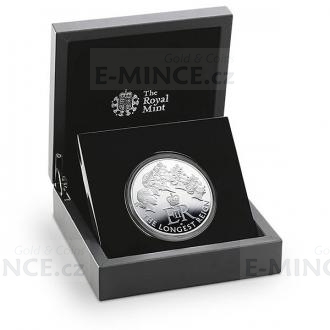 Mark a Royal milestone and celebrate a reign like no other

With an impressive five-ounce silver coin

Ever since Her Majesty The Queen became monarch 63 years ago, we have celebrated significant moments in her life: silver, golden and diamond jubilees and now, as she becomes Britain’s longest reigning monarch, we mark a once-in-a-lifetime occasion. As Her Majesty surpasses the record set by her great-great-grandmother Queen Victoria, we reflect on a reign that has been characterised by unparalleled change.

For this impressive five-ounce coin, we have called upon respected artist James Butler MBE RA, designer of The Queen’s Great Seal of the Realm, to create a commemorative effigy of Her Majesty. For the reverse, Stephen Taylor, a talented member of The Royal Mint’s design studio, has united the five definitive portraits of Queen Elizabeth II that have graced the UK’s circulating coinage, conveying how The Queen has changed over time upon the nation’s coins. Your coin, struck in five ounces of 999 fine silver and finished to pristine Proof standard, comes with a Certificate of Authenticity and a booklet detailing the cultural highlights of Her Majesty’s reign.(source: http://www.royalmint.com/shop/The_Longest_Reigning_Monarch_2015_UK_Five_Ounce_Silver_Proof_Coin?tab=detail#productdetails)