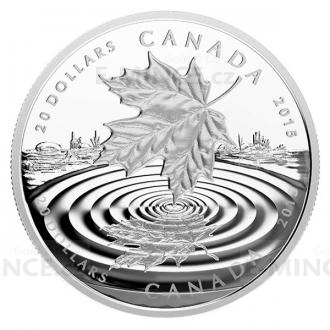 A FIRST! Unique combination of traditional and micro engraving with laser frosting techniques. You must hold it in your hand to truly appreciate this gorgeous design! Order yours today!
No season announces its arrival quite as flamboyantly as autumn. Trees dress for the occasion, turning their leaves to vibrant yellows, reds and golds before tossing them into the air.

Anyone living in the northern hemisphere is well acquainted with this annual tradition, and every year, the beauty of the spectacle lures people outdoors. Those who venture into the forest are treated to a close-up view of the stunning canopy overhead, dancing leaves drifting on the wind, and perhaps coming to rest on a babbling brook where they drift away like little boats, as if to ferry the forest's tiniest residents to warmer climes. A fairy or two, perhaps?

This exceptional coin captures the moment when leaf and water meet. The leaf's reflection is visible for a mere instant, as if to mock the fleeting nature of time. But on this coin, the reflection is a masterpiece that will last generations. It is incredibly detailed, every ripple shines—a stunning effect that has been achieved by applying micro engraving and laser frosting in a way that has never been done before!

A beautiful coin you will want to show your friends and family again and again! Order yours today!

Special features:
• A FIRST! The micro engraved leaf and laser frosted text are reflected in the water, marking the first time that a design has combined traditional and micro engraving with the addition of laser frosting techniques in such a unique and innovative way.
• A FIRST! Micro engraved detail showcases Canada's beloved symbol, the maple leaf, in a remarkable design that captures a tranquil moment in a scene that can be appreciated from coast to coast.
• The soft rippling of the water's surface adds remarkable movement and dimension to the design.
• A timeless gift for art appreciators and nature lovers, as well as those who find inspiration in the natural world.
• Your coin is GST/HST exempt.

About the Design:
Designed by Canadian artist Lilyane Coulombe, your coin features a natural scene with timeless appeal: here, a single maple leaf has fluttered down from a branch above onto the still waters below it. Canada's beloved symbol is showcased in stunning detail thanks to finely detailed engraving that recreates the veins which run along its lobes. Gently piercing the water's mirror-like surface, the tip of the leaf's lobe has set off a wave of soft ripples; and yet the leaf's micro-engraved reflection remains, bouncing with the water's movement in a serene moment that would be all too brief–had it not been forever suspended in time with this coin.

Did you know?
• There are more than 150 different species of maple trees in the world; of the 13 species found in North America, 10 are native to Canada.
• While the maple leaf flag celebrates its 50th anniversary in 2015, the maple tree was only officially recognised as Canada's national tree in 1996.
• The largest of Canada's maple species is the bigleaf maple (Acer macrophyllum) a tree which is found in the southwest area of coastal British Columbia and Vancouver Island.

Packaging:
Your coin is encapsulated and presented in a Royal Canadian Mint-branded maroon clamshell with a black beauty box.
Related products