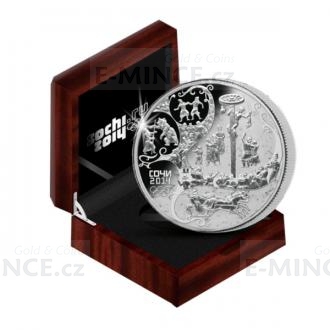 The obverse: on the mirror field of the disc - the relief image of the National Coat of Arms of the Russian Federation, over it - the semicircular inscription along the rim: "РОССИЙСКАЯ ФЕДЕРАЦИЯ" (THE RUSSIAN FEDERATION), below under the coat of arms: to the left - indications of the metal according to the D.I. Mendeleev's Periodic System of Elements and its purity, to the right in two lines - fine precious metal content and the trade mark of the Saint Petersburg Mint, on bottom in the centre, in two lines - the denomination of the coin: "100 РУБЛЕЙ" (100 RUBLES) and the date: "2014 г." ( 2014).

The reverse: on the matted field of the disc, on light sections - genre scenes of Shrovetide festivities: to the right above - the Shrove Pole crowned by a cart wheel, a man who has climbed up the pole and took down a pair of jackboots, figures of spectators around the pole, below - three galloping horses harnessed to a sledge with a fare, to the left at the rim - a man with the trained bear, over them - scene of the fisticuffs between two men; on dark-grey curved stripes which divide light sections of the disc with genre scenes - crowded people in winter clothes watching at what is going on, to the left below, in two lines - the inscription: "СОЧИ" and the date: "2014", under them - five Olympic rings.