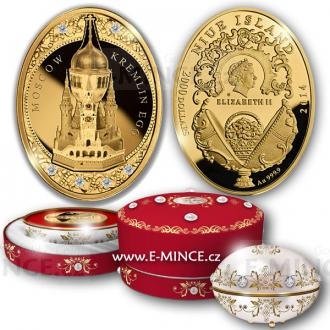 The decorated with 6 diamonds and fanciful ornaments coin featuring an image of the famous Moscow Kremlin Egg is not only a symbol of luxury but also a wonderful work of mint art.

It is offered in a stylish presentation case embellished with crystals and gold decorative motifs. The coin together with its presentation case is set in an exquisite external packaging which has been decorated with pearls.

The “Imperial Fabergé Eggs” series is a continuation of tradition having its roots at the Russian court in the second half of the 19th century. The inspiration for this collection were the renowned eggs created by Fabergé and his assistants made to order of tsars Nicholas II and Alexander III.

For over 100 years these jewellery masterpieces have been a symbol of extravagance and splendour.

The “Moscow Kremlin Egg” was an Easter gift from the last Tsar of Russia, Nicholas II, to his wife Tsarina Alexandra Feodorovna. The design of the egg was inspired by the architecture of the Cathedral of the Dormition in the Moscow Kremlin, the traditional place of Russian tsars’ coronation. The “Moscow Kremlin Egg”, which is the largest of the famous Fabergé Eggs, was manufactured to commemorate the return of the imperial couple to the capital in 1903. The Moscow Kremlin Egg have never left Russia. At present it is housed in one of the oldest Moscow museums – the Kremlin Armoury.

Reverse:
In the central part – a stylized image of the Cathedral of the Dormition which is located in the Moscow Kremlin. Along the internal rim – the name of the Fabergé Egg: MOSCOW KREMLIN EGG. In the upper and lower part of the coin – neo-rococo ornaments embellished with six white diamonds.

Obverse:
At the bottom – open “Spring Flowers Egg” (1899–1903) with a miniature basket and a bouquet of anemones. Above the basket – an effigy of Her Majesty Queen Elizabeth II with an inscription: ELIZABETH II and the mint mark (m/w). Below – the hallmark: Au 999,9. Around the Queen’s effigy – a decorative, neo-rococo ornament. Along the rim – the issuer’s name: NIUE ISLAND, the face value: 2000 DOLLARS and the year of issue: 2014.