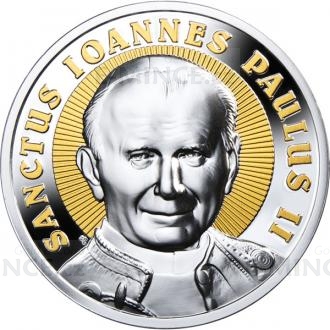 The Mint of Poland is jubilant to announce issuing the “Saint John Paul II” coin to honour the memory of the Pope, who went down in history as a great philosopher, influential preacher and devoted fighter for peace and justice.

This spellbinding coin captures the memorable figure of Saint John Paul II due to which he will dwell in our hearts and minds one more day till the world ends.

The second-to-none craftsmanship of the Mint of Poland and stunning adornments have made this coin a wonderful complement to any collection and a precious gift for every follower of Pope John Paul II.

Reverse:
In the central part of the coin – a high-relief image of John Paul II surrounded by a gold-plated halo. Along the rim – an inscription in Latin: SANCTUS IOANNES PAULUS II (Saint John Paul II).

Obverse:
In the central part of the coin – an image of the papal coats of arms of John Paul II. In the background – an image of the Saint Peter’s Basilica. Below – inscriptions: NIUE ISLAND (the issuer),
2 DOLLARS (the face value), Ag 999 (the hallmark), m/w (the mint mark), ELIZABETH II and
a miniature profile portrait of her Majesty Queen Elizabeth II.