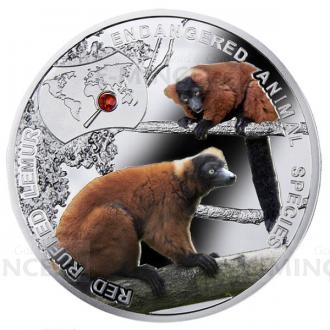 A coin from the series designed to remind us of the duty of taking greatest care of all endangered species. The seventh coin in this remarkable collection is dedicated to the largest mammal of the Lemuridae family – the red ruffed lemur.

This coin stands out with precisely mapped, multi-coloured images of lemurs. Additionally, a map of the world on its reverse was decorated with a SWAROVSKI ELEMENTS crystal, which imitates a magnifying glass to show the place of occurrence of the species.

The exceptional look of the coin is emphasized by its unique packaging including a presentation case with an outline of animals to be featured in this series and an outer box depicting an image of a red ruffed lemur which harmoniously goes with its design.

• An unforgettable gift for the animal lover
• Minted in .999 fine silver
• Innovative digitally printed decorations
• Limited, low mintage of only 2,014 pcs
• Accompanied by a Certificate of Authenticity

Obverse:
In the central part of the coin – an image of Her Majesty Queen Elizabeth II. Below – the hallmark (Ag 999), on the right – the mint mark m/w. Along the rim – inscriptions: ELIZABETH II, NIUE ISLAND (the issuer), 1 DOLLAR (the face value – 1 dollar) and the year of issue – 2014.

Reverse:
The reverse of the coin shows images of two digitally printed red ruffed lemurs. In the upper part
of the coin – an image of a map, showing the location of occurrence of the rhinoceros. Against a map – a magnifier embedded with a SWAROVSKI ELEMENTS crystal, which imitates lens. Along the rim – inscriptions: ENDANGERED ANIMAL SPECIES (the name of the series), RED RUFFED LEMUR (the name of the coin).