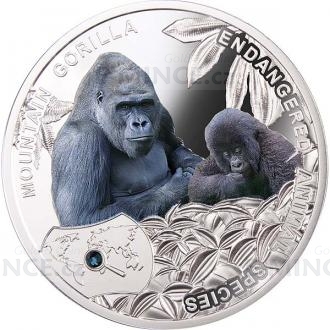 The Mint of Poland is honoured to announce issuing the sixth coin of the series dedicated to animals which are in danger of going extinct. The coin has been issued in the series designed to remind us, human beings, of the duty of taking the greatest care of all endangered species.

The coin stands out with a precisely mapped image of a gorilla. Additionally the location of occurrence of the species has been marked with a SWAROVSKI ELEMENTS decoration.
The coin is offered in an offbeat colorful packaging with an outline of animals to be featured in this series. The coin and its packaging are set in a box with an image of a gorilla which has been designed specifically to house this item.
This important for the mankind theme has been wonderfully depicted on this coin making it the perfect gift for animal lovers.

• minted in .999 fine silver
• an innovative decoration – a multi-coloured digital printing
• low, limited mintage of 2,000 pcs
• New Zealand legal tender
• accompanied by a Certificate of Authenticity issued by the Mint of Poland

Obverse:
In the central part of the coin – the Ian Rank-Broadley effigy of Her Majesty Queen Elizabeth II. Below – inscriptions: Ag 999 (the hallmark), m/w (the mint mark). Along the rim – inscriptions: ELIZABETH II, NIUE ISLAND (the issuer), 1 DOLLAR (the face value) and the year of issue – 2014.

Reverse:
The reverse depicts two digitally printed images of an adult Mountain gorilla and her young, surrounded by leaves of tropical plants. Below, on the left – an image of a map, showing the location of occurrence of the gorilla. Along the rim – inscriptions: ENDANGERED ANIMAL SPECIES (the name of the series), MOUNTAIN GORILLA (the name of the coin).