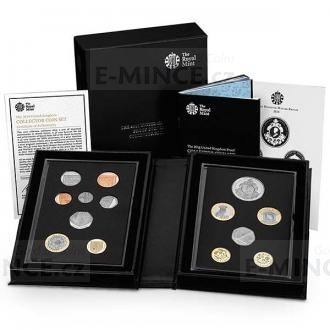 An essential set for collectors, the Collector Proof Set contains the eight definitive coins of the United Kingdom – the 1p to the £2 – along with six commemorative coins including a £5 crown. With 14 coins for 2014 all struck to glorious Proof quality and presented in an award-winning display case, this must-have has been our best-selling set in recent years.
What’s included?

The 2014 United Kingdom Collector Proof SetThe star of the set is a most elegant £5 crown paying tribute to the life and legacy of Queen Anne, 300 years after her death. It was designed by Mark Richards FRBS, creator of the £5 crown struck for the wedding of the Duke and Duchess of Cambridge.

A £2 coin marks the outbreak of the First World War – the first coin in a five-year series that will take us on a journey from outbreak to Armistice. It features the image of Lord Kitchener in his now iconic ‘Your country needs you!’ pose.

A second £2 coin celebrates the 500th anniversary of Trinity House, an organisation that has tirelessly served Britain’s mariners since the time of Henry VIII.

Two £1 coins complete a series begun in 2013. They bear beautiful floral emblems – the flax and shamrock for Northern Ireland and the bluebell and thistle for Scotland.

The official Glasgow 2014 50p has a dynamic design of a cyclist and athlete above the Saltire of Scotland, completing the commemorative editions.

The definitive coins from the 1p to the 50p bear a design that makes up the Royal Arms, created by Matthew Dent in 2008. His full design appears on the £1 coin. The £2 coin celebrating technology, designed by Bruce Rushin in 1997, is the final coin in this 2014 set.

Your coins are struck to flawless Royal Mint Proof standard and presented in our award winning case for you to gift or display them.

A booklet that tells the behind the scenes story of how themes and designs are chosen, and explains the designers’ inspiration is the final touch in this must-have presentation of the coins of 2014. (text source + images: http://www.royalmint.com/shop/The_2014_United_Kingdom_Collector_Proof_Set)