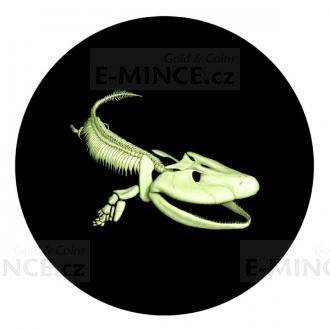 In 2004, researchers working in Nunavut uncovered the fossilized remains of a mysterious prehistoric creature to bridge the evolutionary gap between water and land.

Tiktaalik lived roughly 375 million years ago. It had the gills, scales and fins of a fish, but the head of an amphibian: flat with both eyes on top, and spiracles that suggest the presence of rudimentary lungs.

What's more, Tiktaalik had extra-thick ribs, another adaptation for animals that don't float in water and need extra support against gravity while on land. It also had wrist and finger-like bone structures inside its fins—precursors to actual limbs.

Experts believe Tiktaalik used these limb-fins to push itself out of the shallow, fast-flowing water where it lived and crossed short distances on land. It's a captivating, puzzle-packed creature that will fuel the imagination of dino-detectives young and old alike!

Design:
Your coin was designed by Canadian artist Julius Csotonyi, and illustrates paleontologists' rendition of what Tiktaalik probably looked like.

Packaging:
Your coin is encapsulated and presented in a Royal Canadian Mint-branded maroon clamshell with glow-in-the-dark sleeve.