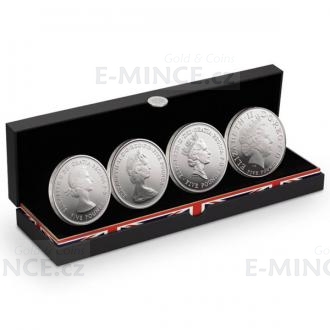 All four of the Queen’s portraits, struck in 2013

60 years have passed since the world celebrated the Coronation of Queen Elizabeth. In that Coronation year The Royal Mint struck the very first coins of her reign. Since, there have been three portraits, each an enduring symbol of Britain. For the very first time all four portraits have been struck in this anniversary year of 2013, to create sets that – struck only together, and only in precious metal – will be the most important we have seen in six decades.

Each of the royal portraits stands as a marker in time, and a work of art in its own right. Created by four distinguished sculptors over the past 60 years, the portraits have been carefully transferred to the £5 coin by our own engravers, who have taken the utmost care to ensure they remain true to the artists’ visions. They have certainly succeeded, even adding a little extra relief so that the beauty of these coins shines ever more brightly, particularly when struck to unrivalled Royal Mint Proof quality in sparkling sterling silver.

There can be no better record of the Queen’s long reign than one of these truly unique sets. A limited edition presentation of only 4,800 sets, only for collectors: these sets must satisfy what is sure to be the highest demand, for none of the coins will be available individually or in any other collection. And with the accompanying rich and informative booklet you can explore the story behind these precious coins, sharing the experiences of the artists and the insight of The Royal Mint’s own experts.

From the fresh and youthful portrait by Mary Gillick that ushered in the Queen’s reign in 1953 to the realistic and confident effigy by Ian Rank-Broadley that has appeared on Britain’s coins since 1998, the four representations of the monarch have entered British history. As decimalisation dawned, Arnold Machin was selected to create a portrait to help distinguish new coins from old, his depiction showing the Queen in more formal pose, wearing a tiara gifted on her wedding day by her grandmother. In 1985, Raphael Maklouf took his part in the story of Britain’s coinage history, representing the Queen in stylised, almost ageless form, a symbol of monarchy rather than a photographic reproduction.

And what other than the Royal Arms could accompany such an important set of obverse designs? The Arms are reimagined for these sets by James Butler RA, creator of the Great Seal of the Realm, hugely powerful and with almost medallic relief.