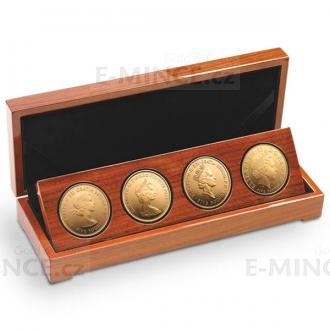 The Queen's Portrait Set Gold Proof 4 Coin Set60 years have passed since the Coronation of Queen Elizabeth II, and since the first coins of her reign were struck. We have seen four portraits on her coins, each destined to take its place in Britain’s history. Now, for the very first time, all four have been struck anew, gracing £5 Coins, dated 2013. Together, they will form the most important sets of coins of the last six decades. And, struck in the most beautiful rose gold, these will be the ultimate collectors’ edition.

For there to be four coinage portraits of a monarch is naturally a rare occurrence. And for all the portraits of a Queen to be struck together is a truly unique numismatic event. In these sets, each portrait has been carefully recrafted by our own engravers, who have stayed true to the vision of the original artist, yet also united all four designs in one stunning set. So precious are they that they will only be struck in gold and silver. And the coins will never be available individually, nor in other sets.

Few artists can claim that their work has been experienced by millions, yet Mary Gillick, Arnold Machin, Raphael Maklouf and Ian Rank-Broadley can stand boldly in that number. The portrait of a monarch becomes a national symbol when it appears on a coin, and each one of us will have held some of these everyday works of art in our own hands. Yet few will be have the opportunity to view these coins, let alone add them to their own collection. A limited edition presentation of only 450 sets in warm, rose gold will be minted, and they must satisfy demand from eager collectors around the globe.

The Queen’s portraits tell a story of their own. Viewed together, they tell a story of our times and of a monarch who has occupied the hearts of her people beyond her Diamond Jubilee. The portraits are united with a common reverse design, the equally iconic Royal Arms, also reimagined in powerful form by James Butler.

In 1953 Mary Gillick created the portrait of the new Queen Elizabeth. Her effigy was youthful and classical, showing the Queen bareheaded with a laurel wreath instead of a crown. As decimalisation approached, Arnold Machin crafted a new portrait, his design more formal, the Queen in a tiara gifted as a wedding present by her grandmother. His effigy would endure until 1985, when Raphael Maklouf was chosen to update the coinage portrait. His depiction was stylised, almost ageless, an attempt to capture a symbol of monarchy. And in 1998 the current portrait by Ian Rank-Broadley took its place on our coins, noble, bold and ultimately, realistic, an image of an enduring Queen.