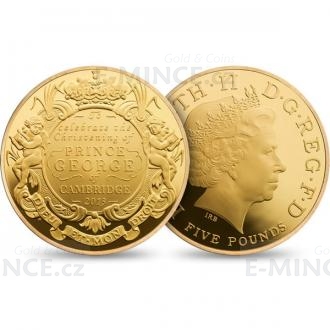 The only official new coin design for Prince George

As Prince George of Cambridge is christened The Royal Mint pays a very special tribute, a tribute worthy of a baby that is destined to be king one day – for the first time a Royal christening has been marked on Britain’s coinage. Our premier coins will honour Prince George, including a commemorative £5, a coin struck so often to mark important Royal events. With its traditional and beautiful design this £5, a glorious Gold Proof, is the perfect way to remember this regal occasion.

When the safe delivery of the first child of The Duke and Duchess of Cambridge was announced on the traditional easel at the gates of Buckingham Palace, The Royal Mint joined in the royal welcome that greeted their son, striking official coins for a Royal birth for the very first time. They were so popular that they sold out in days. And now, as Prince George is christened, there is another first, as official UK coins – they have been approved by the Palace and bear a specially commissioned christening design – are struck.

Royal christenings have many traditions, reflected in the intricate design created by artist John Bergdahl. Lilies and cherubs herald the christening of little Prince George, the fine detail of the design made even more beautiful in fine gold, finished to envied Royal Mint Proof standard. So many were disappointed not to secure a Royal birth coin, and with only 1,000 Gold Proof £5 coins available, demand will be very high.

Marking a Royal christening for the very first time

Those first pictures of the new third in line to the throne, the tiny baby who would be named His Royal Highness Prince George Alexander Louis of Cambridge, were such special moments. The christening is a second moment to honour him, and to celebrate this lovely occasion with the Royal family. An official Gold Proof £5 coin is a wonderful reminder, and as a first for Britain’s coins, it is an important coin for collectors.

Your coin bears a design inspired by Royal christening tradition. John Bergdahl has placed the Lily Font, used in Royal christenings, at the heart of his design, harp playing cherubs flanking the inscription. As is fitting for a notable Gold Proof coin, it is presented in style with a Royal Mint display case and a booklet that explores the history surrounding the christening of Prince George. (source: Royal Mint)