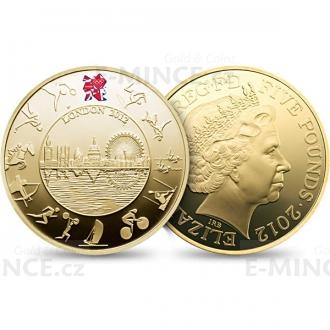 Be part of the London 2012 Games with this new Official Olympic £5 Gold Coin - the perfect coin for those who wish to own a limited edition piece of Olympic Gold.

To celebrate the London 2012 Olympic Games the Royal Mint has struck the new official UK gold coin featuring the winning design by architecture student Saiman Miah from an open competition for all UK art and design students. These UK coins are sure to become the commemorative coins of London 2012, a leading example of London 2012 memorabilia.

Minted in 22 carat gold Proof and with a limited edition of 5,000, the UK £5 coin defining the London 2012 Olympic Games is a perfect souvenir of this historic event. The London 2012 Olympic emblem, which has a Union flag infill in full colour, is exclusive to the Official Olympic and Paralympic precious metal Proof coins. Beautifully presented within a specially designed case, this limited edition Olympic £5 gold Proof coin is sure to be highly sought after.

The Olympic coin design by Saiman Miah features the London skyline and the River Thames within a central circle. Iconic buildings depicted include Big Ben, Westminster Abbey, the Gherkin, St Paul’s Cathedral, the London Eye and the Tower of London, with London 2012 arching above. The outer ring of the design features pictograms representing various Olympic sports which are synonymous with the London 2012 Games. (source: The Royal Mint)