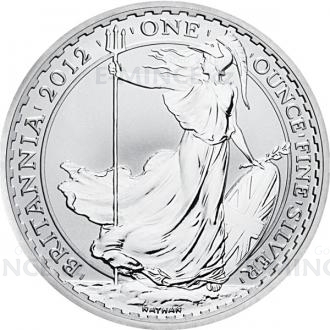 No other icon better represents the pride of the British people than Britannia. In The Queen’s reign she has featured on pre-decimal coins, on decimal coins, on gold coins and, on the large silver £2 coin, has reigned supreme.

The silver Britannia £2 coin for 2012 is struck in Britannia silver, a higher standard silver than sterling, it contains a full ounce of fine silver and remains one of the most popular coins in the Royal Mint showcase. The reverse of the 2012 coin features Philip Nathan’s breathtaking portrait of Britannia framed in the crenellated border peculiar to Britannia coins.

A 25th Anniversary
By the time The Queen came to the throne in 1952, Britannia had assumed the status of an immortal having been an enduring feature of British coinage for almost 300 years. How appropriate, then, that she should grace the new gold bullion coins of 1987, coins that were to be immediately identifiable as British. The new coins were released in October 1987 with a new standing figure of Britannia receiving worldwide acclaim.

A Standing Britannia
The new Britannia was created by the sculptor Philip Nathan who, he explained, ‘wanted to make more of Britannia’s links to the sea, personifying as she does the British love of things nautical and great pride in our naval history’. Standing proudly on the shore, hair and gown streaming in the sea breeze, his Britannia is armed with trident and shield, her love of peace symbolised by the olive branch she grasps in her left hand. Her helmet recalls her Roman ancestry, its elongated visor and plume giving her an elegance and grace that in no way detracts from her inherent strength. (source: http://www.royalmint.com)