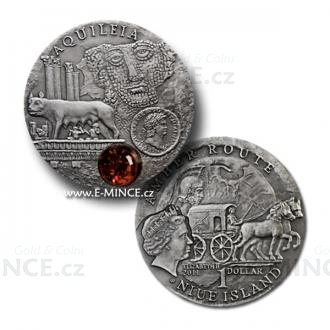 The “Amber Route” is a very popular series of beautiful collector coins struck by the Mint of Poland for the issuer, Niue Island. The characteristic feature of this series is an amber insert and a small mintage. The coins pay tribute to the main cities which lay along this ancient route of commercial contacts. The route connected the European states at the Mediterranean Sea and the lands on the southern shore of the Baltic Sea, and was named after the major object of travelers’ desire, amber.

The first trips to acquire this old object of trade exchange were organized as early as in the 5th century. The exact route was never explicitly established, however, it is assumed that it went through Kaliningrad, Gdańsk, Wrocław, Elbląg, Stare Hradisko, Szombathely, Carnuntum and Aquileia.


Obverse:
In the centre, a stylized image of a cart, in which ambers were carried by the Romans from Baltic Sea to Italy. Behind the cart, on the left, a stylized image of a head of the Roman. On the background, an image of a map with Baltic Sea outline. At the top, along the edge, a semicircular inscription: AMBER ROUTE. At the bottom, a semicircular inscription: NIUE ISLAND; above it, a nominal value: 1 dollar. An image of the Queen Elizabeth II with the Mint’s mark (MW), on the left of the cart. On the right of the Queen’s head, an inscription: ELIZABETH II; under it, a year of issue: 2011.

Reverse:
At the top, a semi-circular inscription – AQUILEIA. Underneath, to the left – columns from Foro Romano di Aquileia and the image of the mythical she-wolf suckling Remus and Romulus (the symbol of the Roman Empire), standing in front of the basilica of Aquileia. To the right – a Roman ancient mosaic presenting a female head. Underneath an image of a Roman coin found in the vicinity of Aquileia. At the bottom, an amber insert.