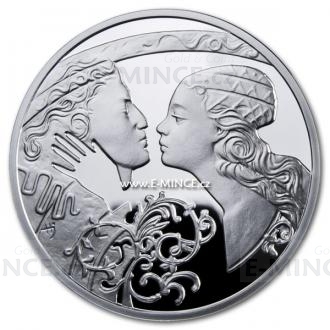 The Mint of Poland is starting a new series of collector coins, “Famous Love Stories”. The collection will feature those lovers whose feelings were so strong to have completely determined their actions, while being so timeless and universal to be remembered forever. Many of these couples, including Romeo and Juliet, to whom the first coin is dedicated, have become the archetypes of romantic love. The series will feature mythological, literary and historical figures and characters, and through their stories, the various feelings and attributes of love: dedication, devotion, passion, longing and pain. The upcoming coins will feature various lovers including Samson and Delilah, Paris and Helen .

The series becomes additionally numismatically attractive through a low mintage – up to 9,000 pieces, and a lettered edge.


Obverse:
In the central part of the coin – the likeness of Anteros, designed based on the Piccadilly Circus memorial in London, also known as the Angel of Christian Charity. Anteros, the younger brother of Eros, was the god of requited and fulfilled love, but also the avenger of scorned and unrequited love. Along the edge, at the bottom, to the left, the inscription: “Niue Island”, and at the bottom, to the right: “1 Dollar, 2010”.

Reverse:
In the central part of the coin – the portrait of Romeo and Juliet, looking at each other. The composition is complemented with a renaissance ornament, a delicate flower as a symbol of their mutual love and developing beauty. The lettered edge repeats “Romeo • Juliet” three times. The inscriptions are divided by hearts.