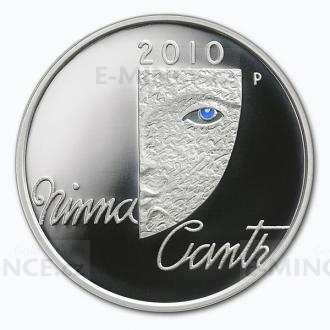 Coin for equality. The ‘Minna Canth and Equality' collector coin marks her achievements both within literature and as an influence in society. Canth was a pioneer, a mediator, an opinion leader and an innovative radical in Finnish literature and in social thinking.


Minna Canth was born 19.3.1844 in Tampere. Her childhood was spent in Kuopio in two preparatory schools and at the Swedish girls' school.

In September 1863 she began her studies as one of the first female students to become a primary school teacher in the recently opened Jyväskylä Seminarium. This was the first time that women in Finland were able to study to become anything other than a midwife.

After marrying Johan Ferdinand Canth, the Seminarium's lecturer in natural sciences, Minna Canth began to work in journalism, a first for women in Finland.

She wrote more than 80 articles, speeches or papers which were published in a variety of newspapers and magazines.

Mother of seven children with a Career

Following the death of her husband, and with seven children to bring up on her own, Minna Canth began to run her father's wool shop. She made the business flourish and began also to run her brother's grocery store.

Her entrepreneurial career was exceptionally successful and along with this success she succeeded in many ways in also breaking through the limitations placed on women. In 1895 she was elected as the first woman representative with a vote in the general traders' assembly.

The next time a woman was elected to the highest executive arm of a general trade association was nearly one hundred years later, in 1989.

Writer and a pioneer of realism

Canth began her literary career with Novels and short stories, published under a pseudonym in 1878. Canth was the first female Finnish writer and also a pioneer in the style of realism in Finnish literature.

She chose to depict the lives of workers, poor people, the dispossessed and women. She examined her subjects acutely, both from a societal and from an individual's point of view. She could only address these issues by giving the reader an authentic picture of them.

The major milestone in Canth's literary career was her play of 1885, The Worker's Wife. It was the first Finnish play featuring characters who were poor and working class.

As well as criticising drunkenness and Christian hypocrisy, the play highlighted many shortcomings in society and the law. For example, women had no right to earn money, a problem which is addressed in the play.

A few years after the publication of The Worker's Wife, a law was passed entitling women to control their own income. Canth's play had a positive impact on discussions of the issue by the Diet. The first time the matter was taken up, in 1882, it had been rejected.

Canth's house in Kuopio, dubbed the Kanttila, became a meeting place for those concerned with literature and social affairs, particularly injustices. It was Minna's salon. There gathered several well-known writers and cultural figures.

Canth continued to run her shops, to write and to host her salon up until her sudden death of a heart attack at the age of 53 on May 12th, 1897.

From 2003, the Ministry of the Interior approved a general flag day on Minna Canth's birthday, February 19th, and in 2007 the date was added as a permanent flag day in the calendar published by the University of Helsinki.

The official name is Minna Canth's Day, the Day of Equality. (source: Mint of Finland)