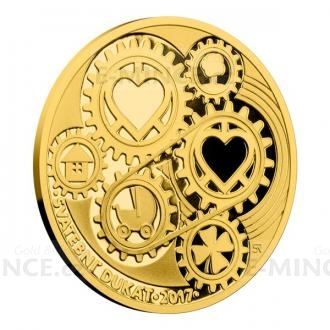 If you want to excel among the usual gifts, that the newlyweds expect, reach for the Wedding ducat of the Czech Mint, which combines the value of gold with the traditional symbolism. The old adage says, that every man has to build a house, plant a tree and rise a son in his life. (The anecdote then adds with a typical Czech humor, that a woman has to clean the house, water the tree and take care of the two men.) It is not entirely clear where this wisdom comes from - it is claimed by the Germans and the Russians and some experts attributes the etymology to the Czechs. However, its roots can be traced back in an ancient treatises of the Babylonian Talmud, which says, that the man has to first build a house, plant a vineyard, and then get married. In any case, it is a true expression of the three primary senses of the human being, which relate to both men and women - they are partnership, creating values and procreation. These three traditional values professes also a young medal maker Roman Shamilyan, who is the author of a new form of the wedding ducat for the year 2017. He conceived both sides of the mintage like clockwork composed of countless gear wheels symbolizing a well functioning marriage. Into their centre he then placed the pictograms of a house, a tree and a stroller, which are complemented with hearts and cloverleafs - symbols of love and happiness, without which no family can do without. The composition also includes an inscription on the obverse side: SVATEBNÍ DUKÁT 2017 /Wedding ducat 2017/.

The ducat is stored in an elegant package, where the newlyweds can stick their wedding photo and inscribe the information about the their big day.