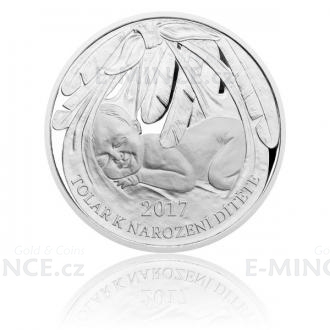 A newborn baby is always in the limelight and his relatives are competing to see who's showing off a better gift. For anyone looking for an original, yet traditional attention, the Czech Mint has prepared a silver commemorative medals - Thalers for the birth of a child.

Even our ancestors gave money for good luck to the newborn babies. Babies from the  families of wealthy aristocrats as well as poor peasants received a talisman in the form of a coin made from precious metal, generally from the godfather or godmother. The fashion of "birth coins" in the Czech lands began in the Renaissance era and continued until the 19th century - when the Church began issuing its own baptismal medals. In the 20th century - after the formation of the Czechoslovak Republic - the state began issuing the so-called St. Wenceslaus ducats, which quickly became popular and in the 21st century it is the Czech Mint, that continues.

The author of the visual theme of the silver thaler is a talented medaillist Lenka Nebeská, DiS. During its creation she was inspired by the legend, according to which the babies are brought by the stork to the parents. On the obverse side she placed a baby wrapped in a shawl surrounded by bird feathers and the composition complemented with an inscription TOLAR K NAROZENÍ DÍTĚTE 2017 /Thaler for the birth of a child/. The reverse side is then followed by the obverse - it is dedicated to a stork, that carries a bundle of joy in its beak.

This eye-catching gift package in the form of a picture book with book jacket contains, besides the thaler, also a space for typing in the birth data, personal dedication and space for inserting photographs of the baby.