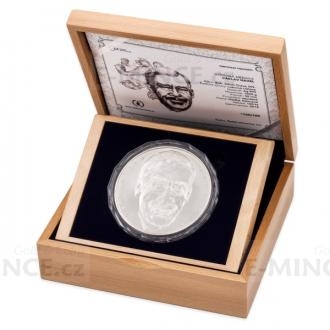 Václav Havel was born in 1936 and left us too early - in 2011. The playwright, philosopher, dissident, human rights activist and president still remains in the hearts and minds of free people throughout the world. The Czech Mint recalls this extraordinary personality, who would have celebrated his 80th birthday in 2016, with an exceptional emission of one kilogram silver medal.

Václav Havel was first introduced to the public as a writer - his successful and absurd dramas aptly pointed out the bureaucracy and dehumanization of society living under the totalitarian dictate. After the Soviet occupation of Czechoslovakia he began to engage politically and he became undesirable for the system. Even communist tyranny could not silence him and Václav Havel undertook the role of the world's leading dissident. When in 1989 the massive anti-government demonstrations broke out, Václav Havel became their symbol and soon also the first non-communist head of state since 1948. It was not only Czechoslovakia who were grateful for the democratic aspirations of Václav Havel. Proved by his nomination for the Nobel Peace Prize, and the fact that as the first representative of a country behind the Iron Curtain, he spoke before both houses of US Congress. His memorable speech was interrupted with 23 sets of applause.

The author of the artistic design of the mintage is a young medalist BcA. Jakub Orava, DiS., who has an extensive experience with displaying the Czech Freedom Fighters - from his workshop have emerged, for example, the commemorative coins with the heroes of the May uprising and Master Jan Hus. The obverse side of the kilogram medal bears a portrait of Václav Havel from period, when became the president of the independent Czech state, complemented with his name and biographical data 1936-2011. The reverse side then belongs to the Czech lion in a defiant pose, symbolizing fearlessness, with which Václav Havel spoke against totalitarianism. In the background are visible the names of his theater plays, that have been an eyesore to the communist regime. Although Václav Havel was a playwright, philosopher, dissident, humanist and president, he was especially a genuine man - this statement forms the last piece of the puzzle on the reverse side of the medal.

The silver remembrance of Václav Havel is issued in an edition of 100 pieces only - each of them is hand-numbered on the edge.