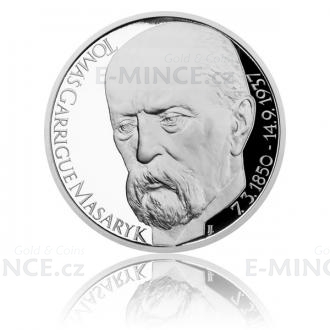 Tomáš Garrigue Masaryk, the founder and the first president of independent Czechoslovakia, last exhaled in 1937, which means 80 years ago. On the occasion of this jubilee, the Czech Mint recalls it through a silver commemorative medal.

Despite the high age, T.G. Masaryk was elected head of Czechoslovakia four times, when he held the office for 17 years. He suffered numerous illnesses, and in 1934 his health got even worse so he decided to abdicate. He recommended Edvard Benes as a successor and went to the Lany castle, which was entrusted to him. Three years later – on September 14, 1937 - at the age of 87 he died of pneumonia. The state funeral of "President Liberator" was magnificent. The last farewell began at the Prague Castle for the ringing of the bells of the St. Vitus Cathedral, President Benes made a speech, and the mourning procession went to the busy streets of Prague. The coffin with "daddy" remains was covered by the Czechoslovak flag and placed on an artillery lafet pulled by six-team horses. It was accompanied by sokol movement and legionaries headed by General Syrovy, Masaryk's descendants and Church representatives, Czechoslovakia and other European states. The train of mourners arrived at Wilson Station, where a special mourning train arrived. T. G. Masaryk went to Lany, where he was buried behind the sounds of the song "Oh son, son." He resided next to his beloved wife, Charlotte, whose surname he had taken for his own sake.

The commemorative medal is the work of the leading medal maker and academic sculptor Jan Lukas. The obverse side of the mintage was devoted to the faithful portrait of the statesman which is surrounded by the description of TOMÁŠ GARRIGUE MASARYK and the biographical dates of March 7, 1850 - September 14, 1937. The reverse side is then a memorial to Masaryk's life roles. Under the two-tailed lion there are inscriptions: PHILOSOPHER, HUMANIST, DEMOCRAT, PEDAGOG, WRITER, FOUNDER AND THE FIRST PRESIDENT OF CZECHOSLOVAKIA.

The memory of the key figure of Czechoslovak history is based on a limited amount of 500 pieces.