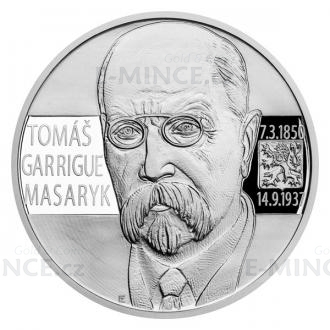 When we say the summer residence of the president, most of us think of the castle in Lány. However, before he chose it as his official residence, T. G. Masaryk stayed at the Hluboš Chateau, which is commemorated by the silver commemorative medal of the Czech Mint.

"August 27, 1920 was the day of the arrival of the President. All roads and paths leading to Hluboš were full of people. The crowds gathered at the crossroads of the villa in Dubí, where the gatehouse was built. Around one o'clock there was an unusual commotion and noise in the crowd, as the crowd said: They are comming! That was it. Two cars were approaching along the Pičín road, in which the president's wife sat with his daughters Olga and Alice… The president did not arrive until five o'clock, as he was detained in Prague on a visit to the English and French missions. Even though it rained all day, the crowds of the people waited for him to arrive, " this was written in the Příbram magazine called Od Stříbrných hor. T. G. Masaryk enjoyed the attention of the locals throughout his stay. In the castle's English park and the surrounding forests, the president enjoyed horse riding and, of course, there was also work to do. "During the President's stay in Hluboš, leading personalities came here, such as minister of foreign affairs E. Beneš, Chancellor Dr. Ex. Šámal, the papal nuncio of Micara, and others., The well-known painter L. Vacátko also stayed here for some time, painting the president on horseback on canvas of enormous dimensions in front of the southern front of the chateau, " A. Podlaha remembers. The three-hundred-year-old pseudo-Renaissance residence served the president and his family until January 7, 1921. T. G. Masaryk left Hluboš, but his spirit lives here to this day…

Academic sculptor Zbyněk Fojtů dedicated the obverse side of the medal to the portrait of T. G. Masaryk with the necessary glasses. The composition is supplemented with the name and life years of the president and also a small emblem of the Czechoslovak Republic. The reverse side of the medal then belongs to the Hluboš Chateau - in addition to the facade of the building, it also presents a reconstruction of a memorial plaque, which still draws attention to the president's stay.

The schedule of issuance of the silver medal is only 100 pieces.