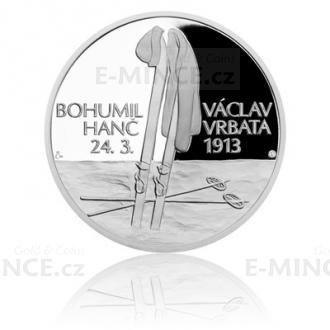 The new cycle of the Czech Mint "Stories of our history" will gradually introduce nine world-famous and unfairly forgotten themes from our history, which every right patriot should be proud of. On the first silver commemorative medal there is a heartbreaking story of legendary skiers Hanč and Vrbata.

An international cross-country race was organized in the Krkonoše Mountains at Easter in 1913 in order to attract foreigners to Bohemia and at the same time strengthen Czech prestige in the predominantly German border. Therefore, it was no wonder, that the phenomenal skier Bohumil Hanč was determined to win at any price. The weather was favorable and all the athletes set off light-dressed, only in trousers and shirts. However, the Krkonose Mountains can be merciless and the weather has worsened rapidly so much that all the competitors, except from Hanc, gave up the race. Hanc did not know he was alone, and he continued, but did not reach the goal. Later, when he was found collapsed, he could not have been rescued. To everyone's astonishment he was wearing a coat and a cap. Only later, when another frozen body was found in the mountains, they all learned the sad truth. The already mightily troubled Hanc encountered his close friend Vaclav Vrbata whom he invited as a spectator on the track. He clutched his clothes and exposed to frost so that his friend could finish the race. Then their paths split, but Vrbata began to worry about Hanc and set out for him. In his pursuit, he laid his life in the snow storm. The heartbreaking history of two friends for life and death was not in vain. On account of that rescue services were established. March 24, the last day of Hanč and Vrbata, is still remembered as Mountain Service Day.

Commemorative medal was made by an expert medal maker MgA. Martin Dašek. The obverse side resembles the cross. There is a pair of sticks and skis stuck in the snow, where he hung a coat and cap. The composition was completed by the inscriptions BOHUMIL HANČ - VÁCLAV VRBATA - 24. 3. 1913. The reverse side was devoted to the two skiers, the snowdrift and the inscription of the INTERNATIONAL SKI RACE IN KRKONOSE MOUNTAINS.

Each silver medal is provided with a special certificate of authenticity, which tells the story of Hanč and Vrbata.
Related products