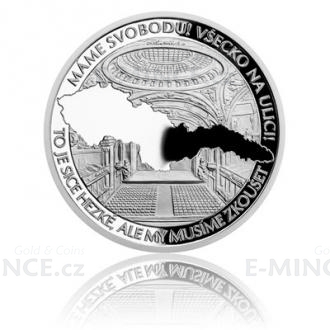 The Czech Philharmonic became the cultural envoy of the young republic just 100 years ago. It supported through its activities the patriotic ideas and increased national self-esteem in the heaviest moments. This is why the third silver medal from the cycle of the Czech Mint "Stories of Our History” belongs to it.

There were many creative personalities of the orchestra who brought us world fame during more than a century of history. For example, the very first concert took place under the baton of Antonin Dvorak on January 4, 1896, and the world-renowned Rafael Kubelik was the chief conductor of the Czech Philharmonic Orchestra in the thirties of the twentieth century.

Above all, however, we can not forget Vaclav Talich. Although he worked in Berlin, Odessa, Tbilisi, Ljubljana, Leipzig, Milan and Pilsen, he was not well known in Prague in 1918. Even so, he had the opportunity to conduct the Czech Philharmonic Orchestra. He conducted the test of Josef Suk's Symphony Poem Maturation when the independent Czechoslovakia was proclaimed in Prague on memorable October 28, 1918. The chief of the Czech Philharmonic Orchestra entered the Municipal House. "We have freedom! Everything on the street!" he cried. Talich said to him in the conduction of faith: "That's nice, but we have to play." Only later, when he saw the patriotic joy in the streets with his own eyes, he felt the meaning of what was actually happening. It was not only Maturation poem, but also Vaclav Talich who renowned at the first concert of the Czech Philharmonic Orchestra in the Czechoslovak Republic two days later. The story of the Czech Philharmonic still continues. It is written by over one hundred and twenty musicians of sixteen instrument groups in unmistakable harmony with the unique concept of each new conductor.

The relief of the commemorative medal has traditionally been made by MgA. Martin Dasek. The reverse side was devoted to the semi-structure of Vaclav Talich, surrounded by his name and life dates. On the obverse side there is a detailed view of the Smetana Hall in the Municipal House, which hosted the Suk Maturity, the outline of the First Republic, as well as the word exchange between the director of the Philharmonic Orchestra and the conductor Talich.