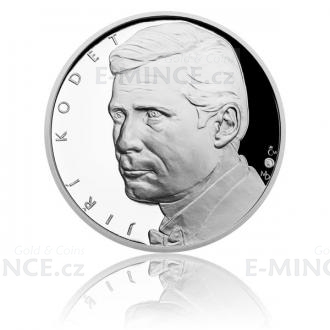 The free cycle of the Czech Mint called Silver Screen Stars is a tribute to the Czech cinematographers, thanks to the silver commemorative medals. Jiří Kodet expands the show of charismatic artists after Karel Fiala, Rudolf Hrušínský and Vladimír Menšík.

It is said in the family of Kodets that their surname comes from the native French cadet who liked the Moravian girl during the Austerlitz battle, so settled here. It is not certain if blue blood circulates in their veins, but in any case, art is flowing in them. Jiří Kodet was born to the sculptor Jan Kodet and the actress of the National Theater Jiřina Steimarová, who came from the theater dynasty dating back to the establishment of the "Golden Chapel". He was a man of many faces, which were often in direct contradiction, not only in theater or on silver screen. He was the character chameleon also in his private life. The gallant, courteous and elegantly dressed man suddenly changed to a ruthlessly sarcastic opponent. His stoic calm was often disrupted by the explosion of temperament that revealed hidden pedantism and choleric storm. He was able to be a generous, kind and character grand, but also a supreme and unbearably elitist snob. At first glance, he acted as a bohemian and handsome shredder of women's hearts, but he was, in fact, an extremely basic man who always went back to the family fireplace. He was an extraordinary personality - a unique authentic actor with a noble and generous style and a sense of exquisite detail or gesture - an unmistakable representative of dozens of film, television and theater roles.

Jiří Kodet, as well as all previous personalities from the Silver Screen Stars series, has been immortalized in pure silver by the excellent portraitist MgA. Martin Dašek. The obverse side is dominated by the charismatic portrait of a young actor with his name in the inscription. The reverse side includes a sophisticated collage, which is in the form of a film roll from which the cellulosic strip unfolds. The individual film boxes capture the different roles of Jiří Kodet. One of them is the choleric father Kraus from the Pelíšky movie, whose immortal message "I GIVE BOLSHEVIK A YEAR, MAXIMUM TWO" is mentioned in the inscription.

An integral part of each medal is a special packaging that portrays the personal life of Jiří Kodet and his career.