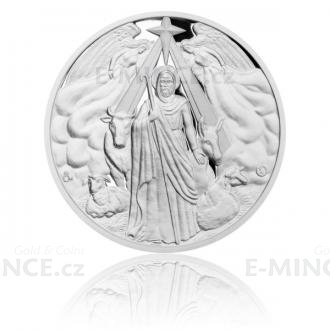 With Christmas time is indelibly associated the story of the birth of the Savior, which in the Czech lands recalls the traditional nativity scene. The Czech Mint has conceived this theme originally - through a series of silver commemorative medals, in which Saint Joseph can not be absent. Joseph, a carpenter, was betrothed to a woman named Mary. When he discovered that his betrothed, who was still a virgin, awaited a child which was not his, the Angel of the Lord appeared to him. He told him, that he should not worry about Mary and he should adopt her miracle child. The righteous Joseph obeyed, and became the chosen head of the Holy Family and the future custodian of the Christian Messiah. In the place of birth of Jesus - Judean town of Bethlehem - was built a church in the first half of the 4th century. In the 6th century, the church burnt down, but was rebuilt and to this day is the oldest continuously functioning Christian church in the world. It bears the name of the Church of the Nativity and the exact place where Jesus came into the world, is marked with a silver star. It is set into a marble floor and has fourteen tips symbolizing the fourteen stops at the Way of the Cross.

This star, complemented with words the Star from the Church of the Nativity in Bethlehem is the main motive for the reverse side of the medal. The obverse side then belongs to a dignified figure of St. Joseph, surrounded by the typical animals, that were present at Jesus' birth, the angels of heaven and the glow of the Star of Bethlehem.

The author of the entire series is a talented medaillist Mária Filová.

Each medal from this Christmas series has its place in an eye-catching collector's album, that takes the form of a folding Christmas crib. You can find it in the menu of the Czech Mint.